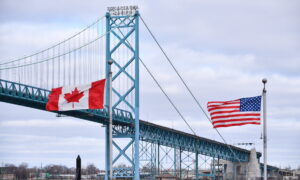 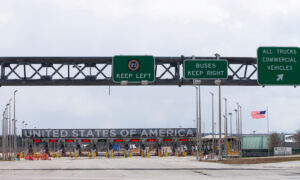 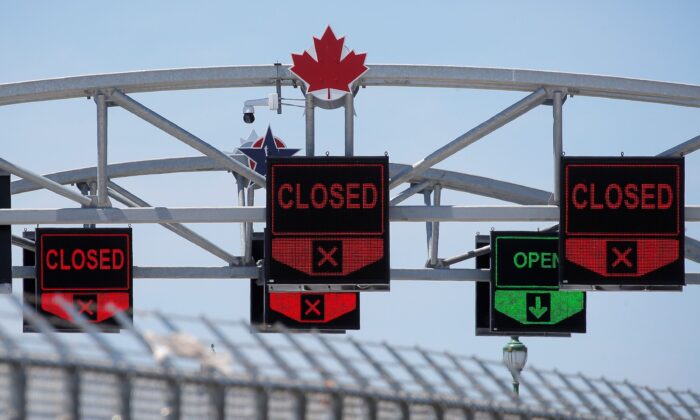 A Canadian maple leaf is seen on The Peace Bridge, which runs between Canada and the United States, over the Niagara River in Buffalo, New York, U.S. on July 15, 2020. (REUTERS/Brendan McDermid)
Canada

WASHINGTON/OTTAWA—The United States and Canada are likely to extend border restrictions until at least the end of November as coronavirus cases spike in some states, according to well-placed Washington and Ottawa sources.

The sources also said Canadian officials were showing little enthusiasm for suggestions from U.S. authorities about relaxing some of the measures in the near term.

The month-long ban, which does not cover trade or travel by air, was first imposed in March and has been rolled over several times. The current range of restrictions runs out on Sept. 21.

“The thinking is that this is probably going to have to extend through at least until American Thanksgiving (Nov. 26),” said one source, who requested anonymity given the sensitivity of the situation.

Canadian officials, especially those in provinces bordering the United States, insist the restrictions must remain.

“Canada has no interest right now in opening up the border,” said a government source in Ottawa.

In Washington, a spokesman for the Department of Homeland Security said “we believe both the U.S. and Canada are working well together to review potential areas for future off-ramping, when public health conditions permit.”

Sources in both capitals said the U.S. side had floated the idea of relaxing the measures to allow for more travel and make it easier for members of families living on both sides of the border to meet.

“My sense is that the American side is more interested in that than the Canadian government,” said the first source.

The few travellers who are allowed into Canada have to go into quarantine for 14 days. The restrictions are particularly painful for U.S. and Canadian towns along the border that are tightly intertwined.

“We will continue to evaluate the best public health information available to us to make a decision on when and how to reopen our border,” she said.

Statistics Canada said last week that U.S. visits to Canada by automobile had plummeted by more than 95% in August compared to August 2019. Canada’s tourism industry says it faces disaster unless Ottawa steps in to help.