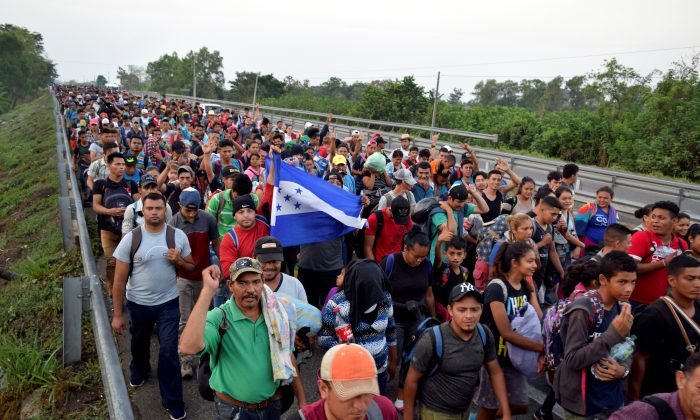 Some 700 Cubans have joined the migrant caravan as it makes its way north towards the United States, in Tuzantan, Chiapas state, Mexico, on March 25, 2019. (Jose Torres/Reuters)
Americas

US Border Within Reach as Thousands of Cubans Flee to Nicaragua

SANTA CRUZ, Bolivia—Outside the José Martí International Airport in Havana, a crowd of agitated Cuban residents is waiting to travel to Nicaragua, which has become a regular occurrence because of skyrocketing demand for flights and sporadic cancellations that began last November.

The scene paints a vivid portrait of people willing to do anything to escape the nation’s communist regime. This has now been made easier by Nicaragua, which threw open its doors on Nov. 22, 2021, and dropped visa requirements for Cubans, accelerating a tidal wave of migrants bound for the Central American country and, according to some, ultimately the U.S. southern border.

Nicaragua’s socialist leader, Daniel Ortega, began the process of waiving the requisite paperwork for Cubans to enter Nicaragua in 2019. However, on Jan. 12, airlines increased the number of direct routes between the two nations, making the escape from Cuba cheaper and easier.

Before January this year, migrants had to travel to Colombia and purchase a second ticket to reach Nicaragua, or deal with limited direct flight options from Havana and take the risk of likely having their ticket canceled due to overselling.

Evidence suggests this is already having an impact on the existing migration crisis at the besieged land border shared by the United States and Mexico.

Before Ortega eased entry requirements in 2019, the number of land encounters with Cuban migrants by U.S. border patrol agents at the southern frontier was fewer than 200 per year, with only 74 recorded in 2018. The following year, however, that number jumped to 11,645 encounters.

“The objective is to leave Cuba, go to Nicaragua, and inundate the U.S. southern border,” Dr. Orlando Gutierrez-Boronat, coordinator for the Assembly of the Cuban Resistance, a pro-democracy coalition of human rights groups, told The Epoch Times.

On Jan. 15, Honduran police apprehended 59 Cuban and Nicaraguan migrants traveling north with four human traffickers, known throughout the region as coyotes. According to a statement from the police, the coyotes were taking the migrants north toward the United States.

The cooperative effort between Ortega’s government and Cuba’s communist regime, now headed by Miguel Díaz-Canel, signals a dramatic shift in attitude toward Cubans wanting to flee.

During the 1990s, Cuban authorities considered it treason to even try to leave the country illegally, an act punishable by up to three years in prison.

In the worst-case scenario, the state could execute someone for deserting the communist island nation.

“Now there’s so much discontent at home, they [Cuban government] just want to get rid of people,” Boronat said.

He added that the demonstrations against Cuba’s communist regime haven’t died down since last summer’s historic protests. In December, opposition supporters from the Vicente Méndez movement in Havana carried out protest activities and demanded the release of political prisoners from the July 2021 demonstrations.

Starting the weekend of Jan. 15, signs and posters began to appear in public places throughout the country with the message “El Paro Va.”  The phrase, which represents the ongoing resistance movement against the government, is Cuban slang for “It is the day we rise,” Boronat said.

“Once you go to an embassy and apply for a visa, which could take a long time to be granted, and the government finds out you’re trying to leave, they cut you off completely.”

Menendez said that, after Cuba’s regime learns a resident is trying to emigrate to another country, they’ll take the person’s job, ration card, and any meager means of survival that remain.

“Even your family and neighbors will stop talking to you. No one can afford to be associated with you at that point. It’s too dangerous,” he said.

No Future in Cuba

Amid the long lines, high hopes, and oversold flights out of Havana, Anton Garcia, 27, managed to secure a ticket to Nicaragua’s capital, Managua, last month.

“No one wants to leave their family behind, but I want to live, not just survive,” Garcia told The Epoch Times.

Even as a young university graduate with an engineering degree, Garcia said his prospects for work in Cuba, let alone the dream of owning a home or starting a family of his own, were pretty grim. After the nationwide protests last year, Garcia knew it was time to leave.

“It’s not easy, though. You spend months trying to get the money. You have to sell everything you own just to buy a ticket,” he said.

The average minimum salary under the stewardship of the decades-long communist regime is $87 a month, which reflects a raise the government initiated in January 2021 to combat the inflated poverty and economic struggles brought on by the pandemic.

When asked if he planned to join the caravan of hopefuls heading for the U.S. border, Garcia replied simply: “Maybe, someday.”

In the meantime, Garcia fixes motorcycles for cash in the Jorge Dimitrov neighborhood of Managua.

Menendez said that anyone who leaves Cuba for Nicaragua will eventually try to head north toward the United States, and that the Central American nation has nothing to offer migrants who choose to stay.

Both nations share a legacy of socialism, achieved through guerrilla warfare, punctuated by lengthy dictatorships and high rates of poverty.

To date, Cuba remains one of the primary countries in Latin America that sends migrants packing for the United States.