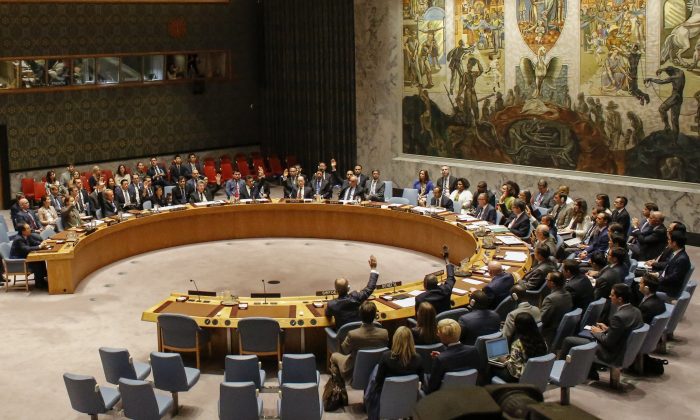 Monday’s decision, triggered by the North‘s sixth and largest nuclear test this month, was the ninth such resolution unanimously adopted by the 15-member Security Council since 2006 over North Korea‘s ballistic missile and nuclear programs.

Japan and South Korea said after the passage of the U.S.—drafted Security Council resolution they were prepared to apply more pressure if North Korea refused to end its aggressive development of nuclear weapons and ballistic missiles.

A tougher initial U.S. draft was weakened to win the support of China, Pyongyang’s main ally and trading partner, and Russia, both of which hold veto power in the council.

“We don’t take pleasure in further strengthening sanctions today. We are not looking for war,” U.S. Ambassador to the United Nations Nikki Haley told the council after the vote. “The North Korean regime has not yet passed the point of no return.

“If it agrees to stop its nuclear program, it can reclaim its future … If North Korea continues its dangerous path, we will continue with further pressure,” said Haley, who credited a “strong relationship” between U.S. President Donald Trump and Chinese President Xi Jinping for the successful resolution negotiations.

North Korea‘s ambassador, Han Tae Song, told the U.N.—sponsored Conference on Disarmament in Geneva on Tuesday the United States was “fired up for political, economic, and military confrontation”.

U.S. disarmament ambassador Robert Wood took the floor to say the Security Council resolution “frankly sent a very clear and unambiguous message to the regime that the international community is tired, is no longer willing to put up with provocative behavior from this regime”.

U.N. member states are now required to halt imports of textiles from North Korea, its second largest export after coal and other minerals in 2016 that totaled $752 million and accounted for a quarter of its income from trade, according to South Korean data. Nearly 80 percent went to China.

“This resolution also puts an end to the regime making money from the 93,000 North Korean citizens it sends overseas to work and heavily taxes,” Haley said.

“This ban will eventually starve the regime of an additional $500 million or more in annual revenues,” she said.

South Korea‘s presidential Blue House said the only way for Pyongyang to end diplomatic isolation and free itself of economic pressure was to end its nuclear program and resume dialogue.

“North Korea needs to realize that a reckless challenge against international peace will only bring about even stronger international sanctions against it,” the Blue House said.

Japanese Prime Minister Shinzo Abe quickly welcomed the resolution and said after the vote it was important to change North Korea‘s policy by stepping up pressure.

The resolution imposes a ban on condensates and natural gas liquids, a cap of 2 million barrels a year on refined petroleum products, and a cap on crude oil exports to North Korea at current levels. China supplies most of North Korea‘s crude.

Chinese officials have privately expressed fears that an oil embargo could risk causing massive instability in their neighbor.

Haley said the resolution aimed to hit “North Korea‘s ability to fuel and fund its weapons program”. Trump has vowed not to allow North Korea to develop a nuclear missile capable of hitting the mainland United States.

South Korean officials said after the North‘s sixth nuclear test that Pyongyang could soon launch another intercontinental ballistic missile in defiance of international pressure. North Korea said its Sept. 3 test was of an advanced hydrogen bomb and was its most powerful by far.

The latest resolution contained new political language urging “further work to reduce tensions, so as to advance the prospects for a comprehensive settlement”.

The resolution also calls on countries to inspect vessels on the high seas, with the consent of the flag state, if they have reasonable grounds to believe the ships are carrying prohibited cargo.

By Michelle Nichols and Jack Kim