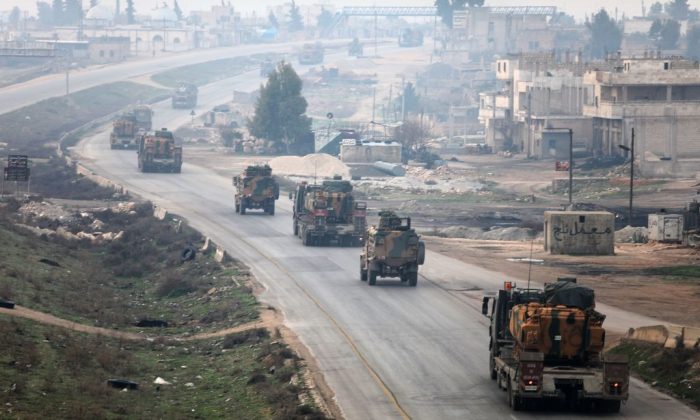 UNITED NATIONS—The U.N. Syria peace mediator warned on Wednesday that a recent increase in violence has created one of the most dangerous moments in years of civil war there, as the government bombards rebel areas and foreign powers further intervene.

“I have been now four years (as) special envoy, this is a violent and worrying and dangerous a moment as any that I’ve seen in my time,” Staffan de Mistura told the United Nations Security Council.

Last week was one of the bloodiest in the nearly seven-year-old conflict as Syrian government forces, backed by Russia and Iran, bombarded two of the last major rebel areas: Eastern Ghouta and the northwestern province of Idlib.

The 15-member Security Council is currently negotiating a possible resolution, drafted by Kuwait and Sweden, that would demand a 30-day ceasefire in Syria to allow the delivery of aid and the evacuation of sick and wounded.

The multi-sided conflict is also raging elsewhere, with Turkey waging an offensive against Syrian Kurdish forces in the Afrin region of northwestern Syria, while on Saturday, Syrian government anti-aircraft fire downed an Israeli warplane returning from a bombing raid on Iran-backed positions in Syria.

“What we are seeing in Syria today not only imperils the de-escalation arrangements and regional stability, it also undermines the efforts for a political solution. Yet we will not be deterred from pursuing the Geneva process, which is the only sustainable path toward a political solution,” De Mistura said.

The U.N.-led Geneva process to try and broker an end to the conflict has been making little or no progress. Last year Russia, Turkey and Iran agreed “de-escalation” zones to ease hostilities in western Syria where they wield influence.

U.S. Ambassador to the United Nations Nikki Haley told the Security Council that Russia was supposed to guarantee adherence to the de-escalation zones and the removal of all chemical weapons from its ally Syria.

“Instead we to see the Assad regime continue to bomb, starve and yes, gas, civilians,” Haley said, referring to President Bashar al-Assad’s government. “Russia can push the regime to commit to seeking a real peace in Syria … now is the time for Russia to use that leverage.”

Russian U.N. Ambassador Vassily Nebenzia pushed back on Haley’s remarks, saying the Syrian political process should be free from “external pressure.” He also called on the United States to “exert their influence” on Syrian opposition fighters to ensure they cease hostilities.