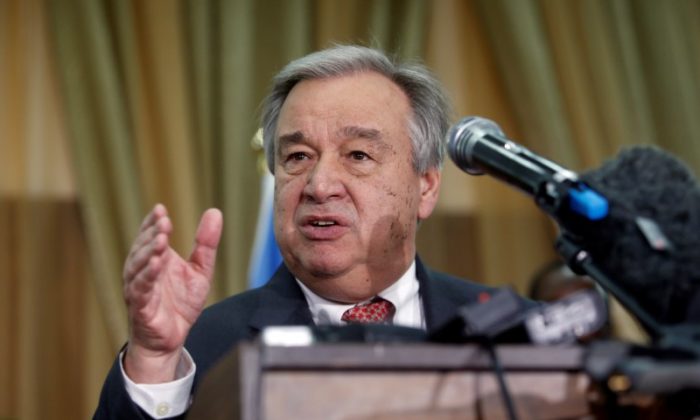 UNITED NATIONS—United Nations Secretary-General Antonio Guterres warned on Thursday against an abrupt cut to U.S. funding for the world body, and France’s U.N. envoy said a retreat by Washington from global affairs could lead to more instability.

“The Secretary-General fully subscribes to the necessity to effectively combat terrorism, but believes that it requires more than military spending,” he said in response to Trump‘s proposal for an additional $54 billion in military spending.

French U.N. Ambassador Francois Delattre said a strong United Nations and a U.S. commitment to world affairs is needed “more than ever”.

“America’s retreat and unilateralism, or even the perception of it by other players, would create the risk of coming back to the old spheres of influence policy, and history teaches us that it has only led to more instability,” Delattre said.

“In foreign policy, as in politics, perception matters,” he said.

U.S. President Donald Trump has proposed a 28 percent budget cut for diplomacy and foreign aid, which includes an unspecified reduction in financial support for the United Nations and its agencies, as well as enforcement of a 25 percent cap on U.S. funding for peacekeeping operations.

U.S. Spending Too Much?

“In many areas, the U.N. spends more money than it should, and in many ways it places a much larger financial burden on the United States than on other countries,” U.S. Ambassador to the United Nations Nikki Haley said in a statement.

The United States is the biggest contributor to the United Nations, paying 22 percent of the $5.4 billion core budget and 28.5 percent of the $7.9 billion peacekeeping budget. These are assessed contributions agreed by the U.N. General Assembly.

The United States currently owes the United Nations $896 million for its core budget.

Trump also has proposed an extra $54 billion in military spending in 2018 to advance “the safety and security of the American people.”

The 15-member U.N. Security Council is also reviewing peacekeeping missions as their mandates come up for renewal.

U.N. agencies such as the U.N. Development Programme (UNDP), the children’s agency UNICEF, and the U.N. Population Fund (UNFPA), are funded by governments voluntarily.

In 2016, the United States was the top contributor to the UNDP’s core budget, with an $83 million donation; the leading donor to UNICEF’s core budget in 2015 with $132 million; and the fourth-largest donor to the UNFPA, giving $75 million in core budget and earmarked contributions.