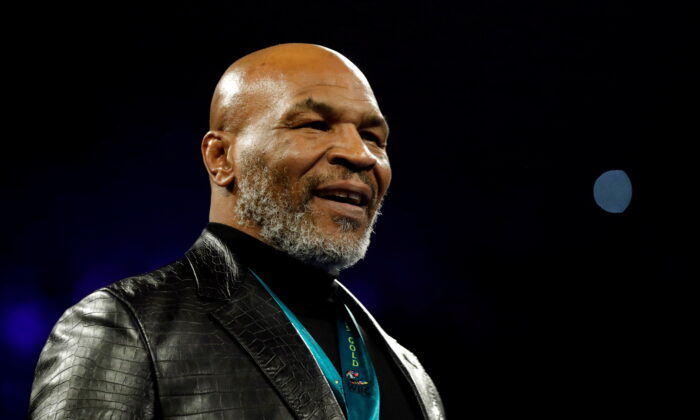 Former boxer Mike Tyson before the fight at The Grand Garden Arena at MGM Grand, Las Vegas, on Feb. 22, 2020. (Steve Marcus/Reuters)
Other US

Tyson Urges Fury to Fight On Amid Retirement Rumors

LOS ANGELES—Former heavyweight champion Mike Tyson has urged Tyson Fury not to hang up his gloves amid rumors that he might walk away from the sport following his electrifying win against Deontay Wilder earlier this month.

Fury sent Wilder to the canvas with a violent knockout punch in the 11th round to end the slugfest in Las Vegas and remain the undefeated WBC and lineal heavyweight champion.

In the leadup to the fight, the 33-year-old Briton suggested he could walk away from the sport happy, and others have said the “Gypsy King” has nothing left to prove after beating Wladimir Klitschko in 2015 and Wilder twice.

Tyson, who Fury is named after, said he hopes that is not the case after what he called a “very exciting” bout.

“Keep on winning brother, keep on winning,” Tyson said. “He’s the lineal champion. He’s the man who beat the man. He is heavyweight boxing, period. He is nobody else.”

Retired British boxer Ricky Hatton has said he hopes Fury will walk away from the sport, and Fury’s wife Paris said she expects him to do so in the next couple of years.

It is unclear who Fury will fight next, although many hope he will get a shot at Ukrainian Oleksandr Usyk, who stunned Anthony Joshua in September to take the WBA, IBF, WBO, and IBO belts.

The winner of that fight would become the first undisputed heavyweight champion since Lennox Lewis 21 years ago.

Tyson said Fury (31–0–1) is already the best heavyweight in the eyes of fight fans.

“Ask anybody except for Usyk, who is the heavyweight champion? And Usyk might even say it’s Fury,” Tyson said.

Fury suffered from substance abuse, weight gain, and mental health breakdowns that led him to the brink of suicide after he upset Klitschko to capture the IBF, WBA, and WBO belts.

He was stripped of those titles when he was unable to defend them, but he beat back his demons and reemerged an even more fearsome fighter as well as a passionate advocate for mental health awareness.

As for Wilder (42–2–1), Tyson said the American needs to shake off the defeat and move on.

“Keep fighting, make money, stack your money up, and call it a day,” he said.