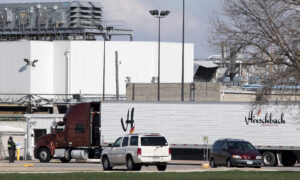 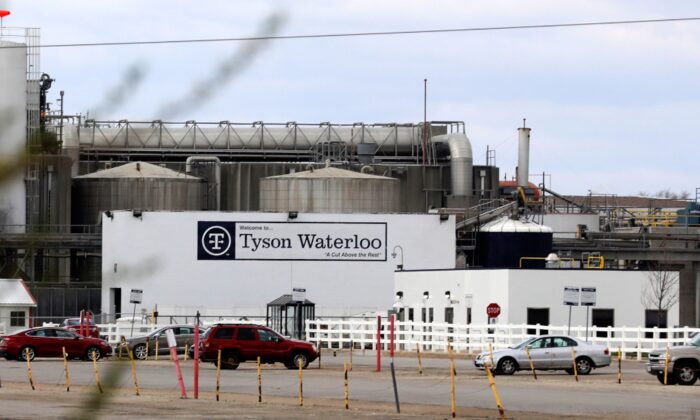 A Tyson Foods pork processing plant, temporarily closed due to an outbreak of the CCP virus (COVID-19), is seen in Waterloo, Iowa, on April 29, 2020. (Brenna Norman/Reuters)
Companies

Tyson’s shares rose about 2 percent in trading before the bell on Wednesday.

The virus outbreak has forced meat-processing companies, including Smithfield Foods Inc, Cargill Inc, and JBS USA, to halt production at about 20 slaughterhouses and plants in North America as workers fall ill.

Some restaurant chains including Shake Shack Inc said their supply chains remain strong, but expect beef prices to increase. Several retailers such as Costco Wholesale Corp and Kroger Co put limits on meat purchases and burger chain Wendy’s Co said it was limiting its menu at some locations.

Tyson said on Tuesday all employees returning to work had been tested for COVID-19 and anyone who tested positive would remain on sick leave until allowed by health officials to return to work.

The company also increased short-term disability coverage for employees to 90 percent of normal pay until June 30, adding it had performed an additional deep clean and sanitization of the entire Waterloo facility while the plant was idled.

The plant, which will resume operations on Thursday, had been working at reduced capacity before it was shut late last month.

As summer approaches and demand for meat increases, plant-based meat burger makers Beyond Meat Inc and Impossible Foods are expanding their presence in U.S. retail stores and offering discounts, hoping to replace meat patties with the vegan alternative.

By Juby Babu and Nivedita Balu