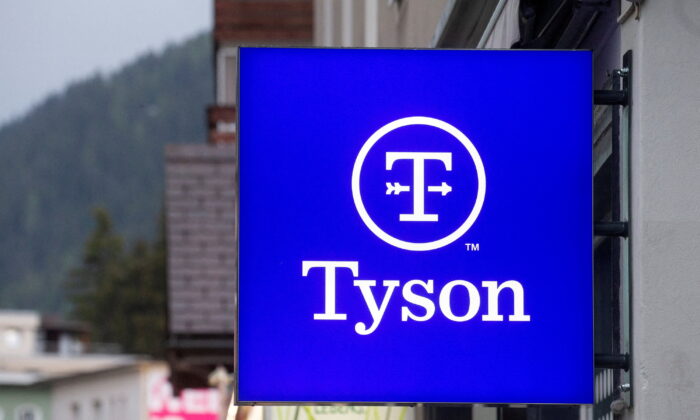 The logo of Tyson Foods in Davos, Switzerland, on May 22, 2022. (Arnd Wiegmann/Reuters)
Companies

The sell-off left shares down about 8 percent for the year and 20 percent from an all-time high reached in February, as inflation and broader economic concerns bite into a U.S. meat sector that had enjoyed booming profits throughout the pandemic.

Tyson said it could not fulfill all its orders for prepared foods products or chicken due to limitations on supplies and labor. In the company’s sprawling production plants, staffing remains below pre-pandemic levels and absent workers were restricting output, executives said.

“We’ve got a lot of work to do to grow our business,” Chief Executive Donnie King told reporters.

To boost chicken supplies, Tyson said it plans to process some 40 million birds weekly in the July to September quarter, up from about 37 million a week on average in fiscal 2021.

“The beef segment is past its margin peak, and recent industry-wide pork processing margins have been soft,” JP Morgan said in an analyst note.

Beef prices dipped 1.2 percent in the quarter, while chicken prices soared 20.1 percent, Tyson said. The company has raised meat prices to offset surging inflation, including $145 million of higher costs for animal feed in the last quarter.

By Tom Polansek and Praveen Paramasivam