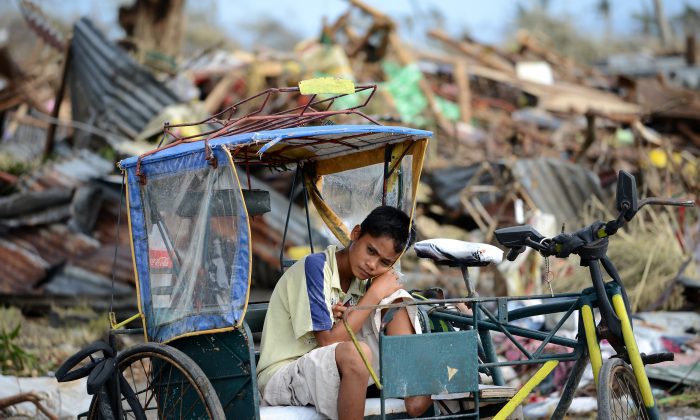 A young survivor rests on a pedicab surrounded by debris caused by Super Typhoon Yolanda (Haiyan) in Tacloban in the eastern Philippine island of Leyte on Nov. 11, 2013. (Noel Celis/AFP/Getty Images)
Asia & Pacific

The latest update for Typhoon Yolanda, or Haiyan, shows that storm-hit islands face a long and massive relief effort.

The relief effort to bring food, water, clothing, and other necessities to central Philippine islands hard-hit by Typhoon Yolanda essentially started on Monday, reported The Associated Press. The news agency reported that bloated bodies are seen floating in the the water, unaccounted for, as body bags or a means for disposal aren’t available.

Over the weekend, the Philippine government deployed police to hard-hit areas to prevent people from looting food, water, and items including TVs–especially in Tacloban City–which was essentially leveled by high winds and 20-foot-high storm surge.

Two officials on Sunday said the typhoon may have killed as many as 10,000 people, but it is unclear if that many died. The official death toll remained well below that.

The devastation also forced President Benigno Aquino III to declare a state of national calamity, reported GMA News, which added that there will be a price ceiling on basic items and necessities.

The declaration, he said, would “hasten the action of the government to rescue, provide help, and rehabilitate the provinces affected by Yolanda.”

“This is important not just to control prices of primary products and services needed by our countrymen, but also to avoid overpricing and hoarding of important goods,” he said, according to Rappler.

James Reynolds, a storm-chaser, said that he was in Tacloban when the storm hit.

“It was just a deafening roar, the wind screaming. You could feel the building shaking as large objects were crashing into the side of the hotel. For anyone out in the street exposed to it, it would have been instant death,” he was quoted by ABS-CBN as saying.

He said that his team rescued elderly people by using mattresses as rafts in stairwells that were flooded with water.

“Thankfully in our hotel everyone made it out safely, but the next day we could see bodies of people lying in the vicinity of the hotel, people who didn’t make it through the storm,” Reynolds told the news agency. “I ventured down right to the coastline where a community had basically been wiped out. It looked like a tsunami had come through, shell-shocked citizens sifting through the rubble of their homes, trying to calculate if they had anything left at all. It was every man, woman and child for themselves. We saw desperate people looting for food, water, medicines.”

Tacloban resembled a garbage dump from the a helicopter view and only by a few concrete buildings were standing.

“I don’t believe there is a single structure that is not destroyed or severely damaged in some way — every single building, every single house,” U.S. Marine Brig. Gen. Paul Kennedy told AP.

The United States said it is deploying aircraft carrier USSGeorge Washington and other Navy ships to the Philippines to aid in the relief efforts.

“The aircraft carrier, which carries 5,000 sailors and more than 80 aircraft, is currently in Hong Kong for a port visit,” reads a statement from Pentagon press secretary George Little. “The crew is being recalled early from shore leave and the ship is expected to be underway later this evening.”