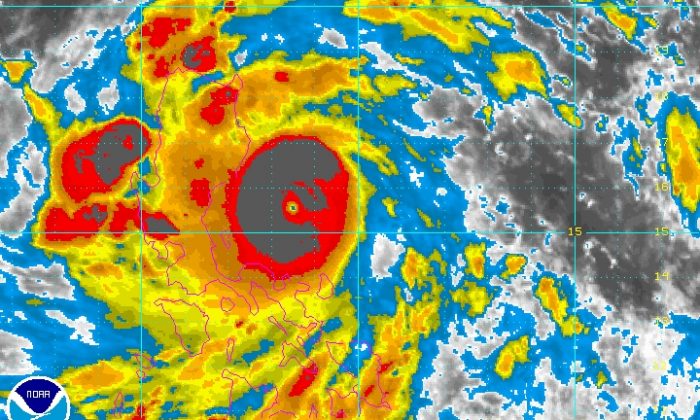 Typhoon Utor Bearing Down on Philippines

Category 4 Typhoon Utor, also known as Typhoon Labuyo, is the most dangerous tropical cyclone so far in 2013, said meteorologist Dr. Jeff Masters, and it is headed for the Philippine island Luzon, where the country’s capital, Manila, is located. Landfall is expected at approximately 20 UTC (4 p.m. EDT) Sunday, as the typhoon gains strength over warm waters.

Utor may intensify to 150 mph winds before landfall, wrote Masters in his weather blog Sunday morning. The Joint Typhoon Warning Center (JTWC) reports that Utor is approximately 250 miles east of Manila and is headed west-northwestward. The warm sea temperature in the region is one of the factors making it likely the typhoon will gain strength before landfall.

It will weaken as it crosses the island, reports the JTWC, but will again intensify over he South China Sea on the other side as it heads toward China.

Masters explained that Utor will likely bring more than eight inches of rain across Luzon, causing flash flooding and mudslides. It will likely hit a few hundred miles south of Hong Kong after passing through Luzon.

“Utor is a Marshallese word for squall line, and has been used for three tropical cyclones in the Western Pacific—in 2001, 2006, and 2013,” Masters said. Typhoon Utor is known as Typhoon Labuyo in the Philippines.