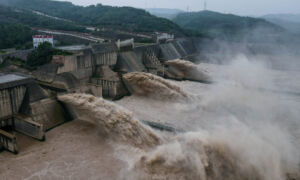 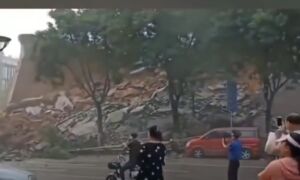 Flood-Related Damages Cause Landslides and Destruction in China
0 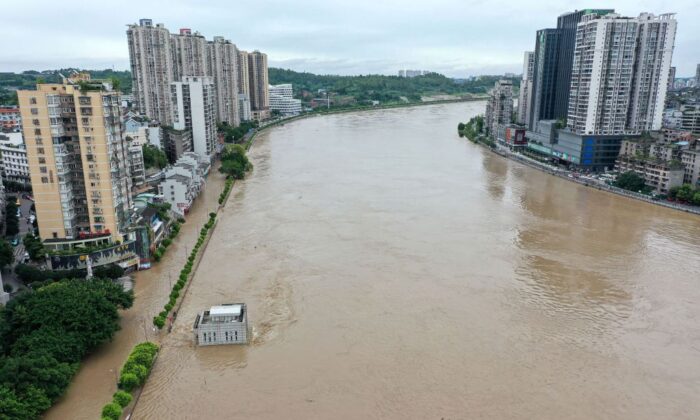 Heavy downpours in southwest China’s Sichuan Province, the nearby megacity of Chongqing, and Gansu Province have left many areas submerged in water as the Yangtze River and several of its tributaries overflowed.

The severity of the rainstorms led China’s Ministry of Water Resources to issue a stark warning late on Aug. 18 about the water level at the Three Gorges Reservoir, which is located on the upper reaches of the Yangtze River.

The water coming into the dam is expected to reach more than 74,000 cubic meters per second in the morning on Aug. 20, the highest level since the dam was commissioned in 2003, the ministry said, according to a report by Chinese state-run media Xinhua.

U.S.-based think tank the Heritage Foundation warned in early August that excessive flooding put dams located on the upstream of the Yangtze River under increasing stress.

Should the Three Gorges dam collapse, the think tank said the massive torrent of water would affect millions living downstream, inundating cities including Wuhan and wiping out extensive cropland, with China already threatened by a food shortage.

In Sichuan, local authorities raised the flood control response to the highest level (level one) of China’s four-tier system on Aug. 18, one day after raising its level from three to two, according to Xinhua. Floodwaters forced local authorities to evacuate more than 100,000 people on Aug. 18, some of them residents of Ya’an, who had to escape after the city’s water banks burst on Aug. 17.

Also in Sichuan, the Leshan Giant Buddha, a 71-meter-tall statue declared a World Natural and Cultural Heritage Site by UNESCO, had floodwater covering its toes, according to Chinese state-run media reports.

Chongqing has been under level-one flood control since the afternoon of Aug. 18, as local floodwaters and mudslides have impacted more than 100,000 people in 31 districts and counties, according to authorities.

In Gansu Province, located northeast of Sichuan, Longnan city was particularly badly hit by the floods. More than 300 homes belonging to about 1,300 residents in Wen County, which is located in the south of Longnan, were buried by a mudslide caused by flooding, according to Chinese state-run media.

China has been grappling with heavy rainstorms since June. Floods have affected at least 54.8 million people in 27 provinces and regions, according to the latest data from China’s Ministry of Emergency Management. But some Chinese netizens question the authorities’ data and believe the true number of casualties to be higher.

Also on Aug. 18, for the first time since this year’s flooding season, Chinese leader Xi Jinping visited impacted residents in eastern China’s Anhui Province, touring regions close to the province’s Huai River, which is located in between the Yangtze River in the south and the Yellow River in the north.

While floods continue to ravage much of China, Typhoon Higos made landfall in southern China’s Guangdong Province at around 6 a.m. local time on Aug. 19, according to Xinhua. The nearby provinces of Hainan and Guangxi are also expected to see heavy rain.

The educational bureau in Zhuhai city in Guangdong ordered the suspension of any school classes in session on Aug. 19, while many flights coming in and out of the Guangzhou Baiyuan International Airport have been canceled.

Residents in these flood-hit areas shared their stories with the Chinese-language Epoch Times.

Mr. Li, a resident in Jintang County in Sichuan, said the flooding in his area wasn’t so much the result of heavy rains but of water overflowing from the nearby Tuo River, a tributary of the Yangtze, that resulted from upstream discharge.

He added that his area began flooding on Aug. 15, and the water didn’t begin to subside until two days later.

Mr. Xu, a resident of Chengdu, capital of Sichuan, said local stormwater reached about 1.2 meters high, submerging his first-floor home. He said much of his furniture, as well as a refrigerator, washing machine, and air conditioner, were damaged by the water. Also, a number of chickens, ducks, and rabbits that he raised were drowned.

He said his home was out of electricity on the afternoon of Aug. 16 when the water level began to rise. Power was restored on Aug. 17, but water supplies were out at around 6 p.m. local time.

He added that three villages near where he lived were also being flooded.

Residents in Gansu’s Wen County said they couldn’t return home due to the flooding. A resident said his hometown of Bikou Town was completely inundated with water about two-stories deep as of roughly 6 p.m. local time on Aug. 18. He wasn’t sure when he could go home.

Also living in Bikou, a farm owner said a local highway was shut down due to mudslides, adding that local public transportation was also out of service.