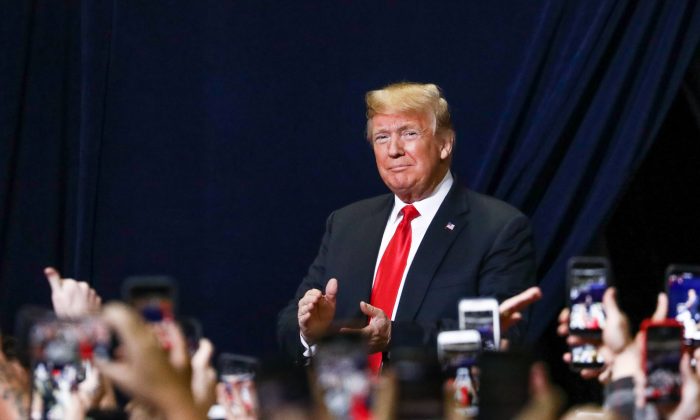 SAN FRANCISCO—U.S. President Donald Trump has taken credit for the stock market’s gains during his nearly two years in the White House, and those claims are reasonable given the impact of tax cuts and pro-business policies on investor sentiment.

Still, other sectors that could have been expected to benefit strongly from a Trump presidency have lagged. Indeed, the individual stocks that have gained and lost the most during his reign have little discernable link to Trump’s presidency.

Trump’s strong stock market record has been maintained even after a recent pullback on Wall Street as worries about trade battles, inflation, and rising interest rates have increased caution among investors. Starting in 2010 under President Barack Obama as the world recovered from the financial crisis, the S&P 500 has enjoyed its longest bull market in history.

With more than half of Trump’s presidency still to come, how the market will perform over his whole term is unknown. Democratic President Bill Clinton saw the S&P 500 triple during his two terms in the White House.

Average S&P 500 company earnings per share are on track to rise 24 percent this year, the strongest annual gain in eight years, according to IBES data from Refinitiv.

Investor confidence stemming from the tax cuts and Trump’s other business-friendly policies so far have more than made up for ongoing worries on Wall Street that his trade conflict with China is hurting the U.S. economy, and that it could become worse.

The tax cuts also led Apple and other multinationals in the technology sector to repatriate billions of dollars in profits held overseas, some of which went toward buying back stock and sending Wall Street higher.

The S&P 500 information technology index has gained 51 percent since Trump’s election. Financials, which benefited from Trump’s deregulation of the banking industry, have climbed 34 percent since Nov 8, 2016.

Still, some companies that had been expected to boom under Trump have fared poorly. The S&P 500 energy index is flat since Trump’s election, even though crude prices rose over 50 percent during that time and despite Trump putting the brakes on Obama-era policies aimed at reducing the country’s reliance on oil.

Semiconductors have fared better than any other industry group, even though they are highly exposed to China and could become casualties in Trump’s trade war with Beijing.

Along with telecommunications, food and tobacco companies, automakers on average have fared worst among 27 industry group’s since Trump’s election. General Motors Co. and Ford Motor Co. have been wrestling for years with tepid global demand, with recent signs of a deep slowdown in China.

Industry groups are more detailed categories than the 11 sectors widely tracked on the stock market.

Abiomed Inc., the S&P 500’s top performer since Trump’s election, has jumped over 260 percent, helped in part by the success of its Impella heart pumps.

General Electric’s 68 percent loss makes it the S&P 500’s worst performer since Trump was elected. The former industrial powerhouse has foundered in several key markets in recent years and is aggressively cutting costs and selling businesses.