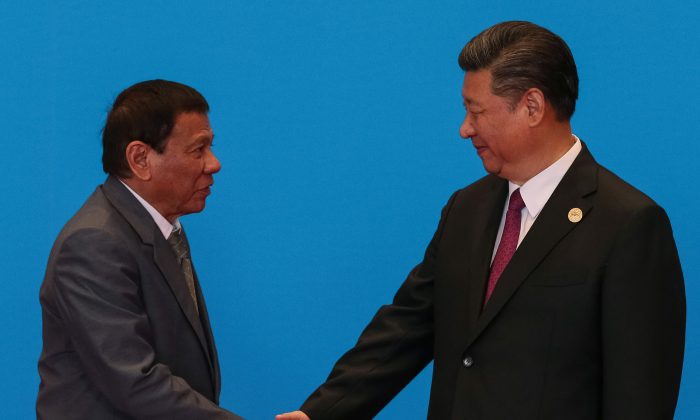 Chinese leader Xi Jinping shakes hands with Philippine President Rodrigo Duterte as they attend the welcome ceremony at Yanqi Lake during the Belt and Road Forum in Beijing on May 15, 2017. (Roman Pilipey/Reuters)
China Business & Economy

MANILA—Two years after Philippine President Rodrigo Duterte announced a divorce with old ally the United States in return for bumper business ties with China, he doesn’t have much to show for it.

Duterte left Beijing in 2016 with $24 billion of Chinese loans and investment pledges for his ambitious infrastructure overhaul, a few weeks after saying the Philippines was being treated unfairly by Washington and would be better off with China.

But only a fraction of China’s pledged support has materialized, exposing Duterte to criticisms he has been complicit in allowing the Chinese regime to pose threats to Philippines’ sovereignty, and been left high and dry by Beijing.

When Chinese leader Xi Jinping visits the Philippines this week, Duterte will need Xi to put his money where his mouth is and help Duterte justify his geopolitical concessions to a historic rival, according to Richard Heydarian, a Manila-based defense and security analyst.

“Otherwise, we can definitely conclude that there’s really nothing much in the rhetoric and the Philippines has been taken for a ride,” Heydarian said.

“Duterte’s naivety with China has been a slam dunk strategic coup for China, no doubt about it.”

Philippine’s Budget Secretary Benjamin Diokno said it would be unreasonable to expect all the Chinese pledges to come through after only two years, but officials were hopeful intervention by Xi after his visit could help.

“We’re very optimistic this will, their head of state, will pressure their bureaucracy to speed up the process,” he said last week.

Duterte’s signature “Build, Build, Build” infrastructure program, the centerpiece of his economic strategy, involves 75 flagship projects of which about half are earmarked for Chinese loans, grants or investments.

But according to publicly available Philippine government documents reviewed by Reuters, only three of those—two bridges and an irrigation facility worth a combined $167 million—have so far broken ground.

The rest, including three rail projects, three highways and nine bridges, are at various levels of planning and budgeting, or are awaiting Chinese government approval for financing, or the nomination of Chinese contractors.

Chinese committed investments in the Philippines in the first half of this year were just $33 million, about 40 percent of that of the United States and about a seventh of Japan’s, according to the Philippine Statistics Authority, tracking a similar trend the previous year.

Trade between China and the Philippines has picked up significantly, but data suggests mostly in China’s favor.

Chinese exports to the Philippines grew 26 percent in the first nine months of 2017 from the same period a year earlier, outpacing its imports from Manila, which grew 9.8 percent.

Net foreign direct investment from China has, however, surged to $181 million for the first eight months of this year, from $28.8 million for all of 2017, according to the Philippine central bank.

Many ordinary Filipinos as well as international lawyers and diplomats are incensed by Duterte’s refusal to even raise with China the Permanent Court of Arbitration’s (PCA) 2016 award that ruled in the Philippines’ favor, and invalidated Beijing’s claim to most of the South China Sea.

Instead, Duterte is seeking an agreement with China to jointly explore offshore gas at the disputed Reed Bank in the resource-rich and strategic waterway. Some lawmakers fear that could be tantamount to recognizing Beijing’s claim to a site that the PCA ruling said China has no sovereign rights to under international law.

Heydarian said if Duterte was unable to show an economic dividend from his China gambit, it could weaken his hand ahead of 2019 mid-term elections that might determine the success or failure of his presidency.

To stand a chance of delivering on his policy agenda, Duterte needs his allies to command a majority in Congress and the Senate to ensure key legislation is passed to enable reforms aimed at generating revenue, attracting investment and creating higher-quality jobs.

“If after Xi Jinping’s visit, there’s still no big move by China to invest in the Philippines, if China’s militarization and reclamation will just continue unabated, you’re going to have a situation where Duterte will come under extreme pressure,” he said.

“The opposition is going to use that to pin down Duterte and his allies as Chinese lackeys.”