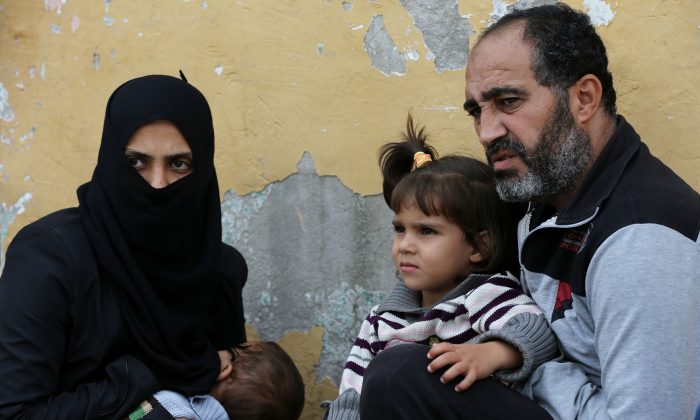 At least 16 states in the U.S. are refusing to accept refugees from Syria until certain security measures are put in place following the terror attacks in Paris.

The security concerns are due to the fact that at least one of the terrorists posed as a refugee and made his way from Syria through multiple countries until finally arriving in France.

Ahmed Almuhamed, who officials believe was one of the suicide bombers who attacked Stade de France during a soccer game, traveled through Greece, Serbia, and Hungary, among other countries, during his journey posing as a refugee.

He was accompanied by another man at least part of the way who may have been involved in the attacks as well.

The situation has added fuel to concerns that proper security measures are not being taken while the mass of Syrian refugees are being resettled in countries around the world.

Media identfying one of the #ParisAttackers as Ahmed Almuhamed, the holder of the fake Syrian passport pic.twitter.com/u3b3BaXpnC

“Given the tragic attacks in Paris and the threats we have already seen, Texas cannot participate in any program that will result in Syrian refugees — any one of whom could be connected to terrorism — being resettled in Texas,” Abbott said in a letter to Obama.

The announcements came a day after the governors of Alabama and Michigan said the same thing.

Alabama Governor Robert Bentley announced that he would not allow any Syrian refugees to relocate in Alabama.

“After full consideration of this weekend’s attacks of terror on innocent citizens in Paris, I will oppose any attempt to relocate Syrian refugees to Alabama through the U.S. Refugee Admissions Program. As your Governor, I will not stand complicit to a policy that places the citizens of Alabama in harm’s way,” he said in a statement.

The state has not processed any refugees as of yet, although a center was established in Mobile.

Michigan Governor Rick Snyder also said in a statement that his state would not accept refugees.

“Michigan is a welcoming state and we are proud of our rich history of immigration. But our first priority is protecting the safety of our residents,” he said in a statement.

Snyder’s administration had previously been supportive of resettlement efforts, with about 1,800 to 2,000 refugees settled in the state over the past year, reported the Detroit Free Press.

About 200 of those are from Syria while many of the rest are from Iraq.

President Barack Obama announced in September that the U.S. would increase the number of Syrian and other refugees the country will admit in the next to years to 100,000.

Syrian refugees have arrived in New Orleans, Louisiana and Jersey City, New Jersey, among other areas, in recent months.

The White House insists that proper security measures have already been in place and officials don’t see the need to change anything after the Paris attacks.

“We have very extensive screening procedures for all Syrian refugees who come to the United States,” said White House Deputy National Security Adviser Ben Rhodes on NBC’s Meet the Press. “There is a very careful vetting process that includes our intelligence community, our Counterterrorism Center and the Department of Homeland Security.”

But Rep. Peter King, R-NY, is among the elected officials who believe things need to change.

The member of the House homeland security and intelligence committees said on Fox News Sunday that the administration is “rolling the dice” by taking in Syrian refugees, because there’s no true vetting process due to few government records being available from Syria to confirm the identities of the refugees.

“We don’t know who these people are,” he said.