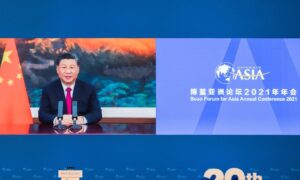 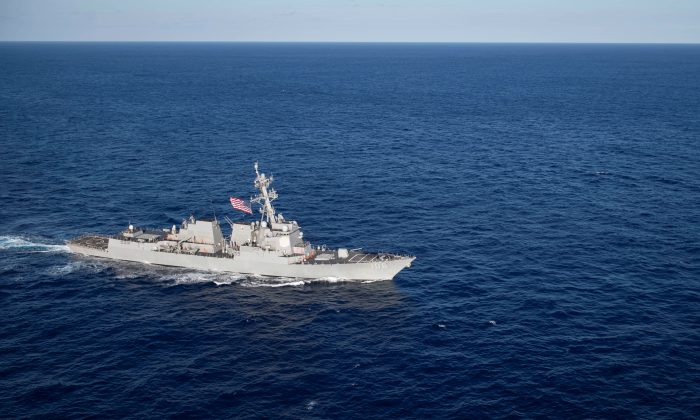 WASHINGTON—The United States sent two Navy ships through the Taiwan Strait on Nov. 28 in the third such operation this year, as the U.S. military increases the frequency of transits through the strategic waterway despite opposition from China.

The voyage risks further raising tension with China but will likely be viewed in self-ruled Taiwan as a sign of support from U.S. President Donald Trump’s government amid growing friction between Taipei and Beijing.

“The ships’ transit through the Taiwan Strait demonstrates the U.S. commitment to a free and open Indo-Pacific,” U.S. Pacific Fleet said in a statement.

It said the passage was carried out by the destroyer USS Stockdale and the Pecos, a replenishment vessel.

Taiwan’s defense ministry said it was a normal transit through international waters in the Taiwan Strait and Taiwan forces had monitored the passage of the ships.

China’s foreign ministry spokesman Geng Shuang said at a regular briefing on Thursday that Beijing had expressed its concern over the passage to the United States.

“We urge the United States to … cautiously and appropriately handle the Taiwan issue, avoid damaging the peace and stability of the Taiwan Strait and China-U.S. relations,” he said.

“The Taiwan issue is a matter of China’s sovereignty and territorial integrity, and is the most important, most sensitive core issue in China-U.S. relations, and involves China’s core interests,” Ren told a monthly news briefing.

“The will and determination of the Chinese military to protect our sovereignty and territorial integrity is unswerving.”

The U.S. patrol comes ahead of an expected meeting between Trump and Chinese leader Xi Jinping this week in Argentina on the sidelines of a G20 summit.

The U.S. Navy conducted a similar mission in the strait’s international waters in July, which had been the first such voyage in about a year.

The latest operation shows the U.S. Navy is increasing the pace of strait passages.

Washington has no formal ties with Taiwan, but is bound by law to help it defend itself and is the island’s main source of arms. The Pentagon says Washington has sold Taiwan more than $15 billion in weaponry since 2010.

China claims Taiwan as part of its territory and has never renounced the use of force to bring the island under its control—despite Taiwan being a democracy with its own constitution, elected officials, and military.

The Chinese regime has also alarmed Taiwan by ramping up military exercises this year, including flying bombers and other military aircraft around the island and sending its aircraft carrier through the narrow Taiwan Strait separating it from Taiwan. Taipei has denounced such actions as intimidation.

Over the weekend, Taiwan’s ruling pro-independence Democratic Progressive Party suffered heavy losses in mayoral and county elections to the China-friendly Kuomintang, which has been welcomed by Beijing.

Taiwan is one of a growing number of flashpoints in the U.S.-China relationship, which also include a trade war, U.S. sanctions and China’s increasingly muscular military posture in the South China Sea, where the United States also conducts freedom of navigation patrols.

By Idrees Ali. The Epoch Times contributed to this report.