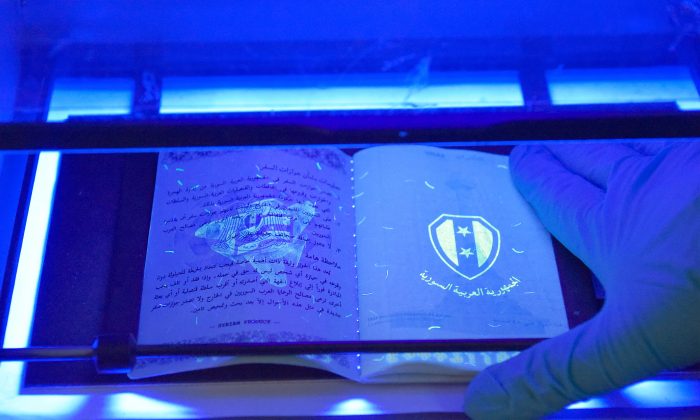 A Syrian passport at a center for arrival for refugees in Sachsen, eastern Germany, on Dec. 19, 2018. (Matthias Rietschel/AFP/Getty Images)
Europe

Two Syrians Arrested in Germany for Suspected Crimes Against Humanity

BERLIN—Police have arrested two Syrian citizens in Germany on suspicion of crimes against humanity, including torturing prisoners, while working for Syria’s intelligence service, federal prosecutors said on Feb. 13.

Germany, Norway, and Sweden are the only European countries whose laws allow them to prosecute and try war crimes committed outside their territory. Germany is home to more than 600,000 Syrians.

The two suspects, identified as Anwar R., 56, and Eyad A., 42, were arrested by federal police in Berlin and Rhineland-Palatinate state. Both had been part of the Syrian security service center in Damascus and had left Syria in 2012, a spokeswoman for the GBA Federal Prosecutor’s Office said

As a high-ranking employee in the Syrian intelligence service, Anwar R. is strongly suspected of participating in crimes against humanity by torturing opposition activists between 2011 and 2012, prosecutors said in a statement.

“As head of the so-called investigative department, Anwar R. assigned and directed the operations in the prison, including the use of systematic and brutal torture,” said the statement.

The other Syrian is suspected of helping to kill two people and torturing at least 2,000 as an intelligence worker between July 2011 and January 2012, it said. He is suspected of working in the department Anwar R. was directing.

Anwar R. has been in Germany since mid-2014 and Eyad A. since mid-2018, the prosecutor’s spokesman told Reuters, adding that both suspects had applied for asylum in Germany.

“It was a question of time that someone is identified and will be accused and later on arrested, most probably indicted and put on trial in Germany or another European country,” Wolfgang Kaleck, the head of European Center for Constitutional and Human Rights, told Reuters.

Six torture survivors, some of whom live in Germany, have given testimonies against one of the two suspects, Kaleck said.