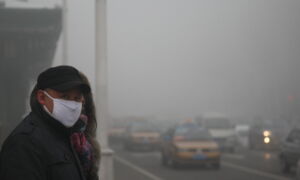 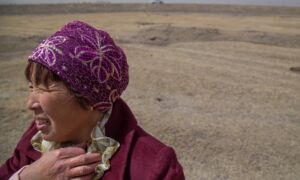 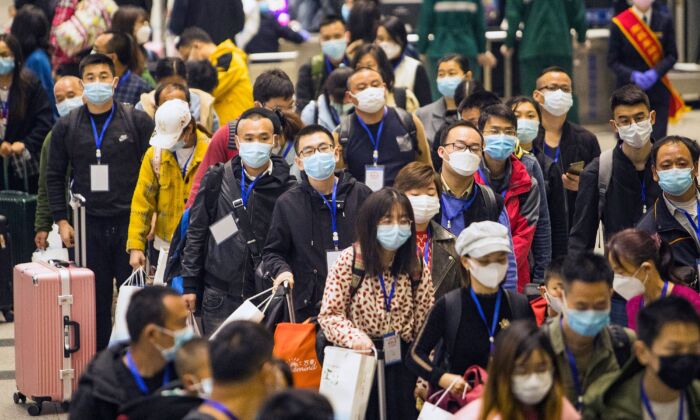 Migrant workers and their relatives are waiting for the train to go to Shenzhen at Yichang East Station in Yichang in China's central Hubei province on March 23, 2020. (STR/AFP via Getty Images)
INSIDE CHINA

However, netizens realized that the data conflicted with information the Guangdong government previously published.

And two days earlier, in the nearby city of Shenzhen, authorities announced that six teachers and 21 students were infected.

Guangzhou and Shenzhen are the most populous cities in the southern province of Guangdong.

Beginning on April 27, middle and high schools will reopen in the whole province for senior students, as they need to prepare for high school and college entrance examinations in July.

Provincial authorities are now concerned about how to prevent the virus from spreading in school.

The Guangzhou city government issued an announcement on its official website on April 24, explaining that authorities began giving nucleic acid diagnostic tests to all “key groups.” The government did not explain who belonged to these groups.

In the first group of “key people,” authorities tested 10,280 individuals and 139 of them tested positive as asymptomatic carriers.

The second and third groups are people tested at “key sites” and “relevant areas.” The government did not give a number of positives for these categories.

The fourth group is “those who revolve around the close contacts of families and workplaces with infections,” including taxi drivers.

In total, 31,391 in the fourth group were tested. And all of them tested negative.

During four large-scale inspections of these four groups, “138,700 people in total have done testing… 185 tested positive. Of those infected, 164, or 88.6 percent, are asymptomatic carriers,” according to the announcement.

However, the new announcement was not accurate.

The announcement said all taxi drivers in this sampling tested negative. But the government itself announced two cab drivers who tested positive days before.

On April 21, the Guangzhou municipal health commission announced that a 49-year-old taxi driver was diagnosed as an asymptomatic carrier. He drove a taxi with plate number YueA 6J1H3. The driver was tested during a “key group” testing, as he was the close contact of a recently diagnosed person.

On April 17, the commission announced a 43-year-old taxi driver who was diagnosed with the virus. The driver drove several foreign passengers before he began to develop symptoms on April 14. He then was diagnosed when he visited a hospital for treatment

Guangdong Province asked all senior students in middle and high school to return to class on April 27.

Schools serving all grades were closed across China following the Lunar New Year holiday in January, in an effort to prevent the virus from spreading. In early April, local authorities eager to claim that the virus was contained announced plans for schools to reopen.

Students in other grades and primary schools in Guangdong will return to class on May 11.

The Shenzhen municipal health commission announced at a press conference on April 22 that some students and teachers were infected with the CCP virus. it is unclear when or how they contracted the virus.

“Six teachers were infected, five of them were diagnosed cases and one is an asymptomatic carrier,” Wu Bing, deputy director of the commission, said. “Four [diagnosed] teachers were discharged from the hospital. One is being treated at the hospital.”

Shenzhen is a city with a large number of migrant workers who are originally from Hubei Province, the epicenter of China’s epidemic. After schools closed in January for the Lunar New Year holiday, many teachers and students went back to their hometowns.

Now that schools are reopening, there is concern that teachers and students may carry the virus and inadvertently spread it among the school population.

The Shenzhen municipal health commission announced on its website on April 23 that all teachers and other school staff who are in close contact with students must receive a nucleic acid test before returning to school.

Teachers and students who are returning from Wuhan—the capital of Hubei Province and the virus’s ground zero—must be tested twice. The interval in between the two tests should be seven days or longer.

Meanwhile, they have to be quarantined for 14 days upon arrival in Shenzhen. The ones who have a green health QR code—based on a mobile app that citizens install on their phones and use to record their health status—can be quarantined at home or school. Others without the green code must be quarantined at hotels that have been converted into quarantine centers, where they must pay any fees incurred.

The teachers and students who are returning from other cities in Hubei only need to take one nucleic acid test but will also need to be quarantined upon arrival.

So far, there is no special protocol for teachers and students returning from other cities in China.

The commission asked each school to prepare enough masks for all staff and students; infrared thermometers that can screen people’s body temperatures when they pass by; handheld thermometers; protective suits; disinfectant; and so on. Each teacher and student will have two masks to use per day.

Authorities are also anxious that the virus could spread among a dense student population and asked each school to separate students into less than 25 students per class. In Guangzhou, authorities said students should not share tables with each other. In Shenzhen, schools will not hold any academic tests in the first two weeks after reopening—as tests are usually given to a large group of students en masse.