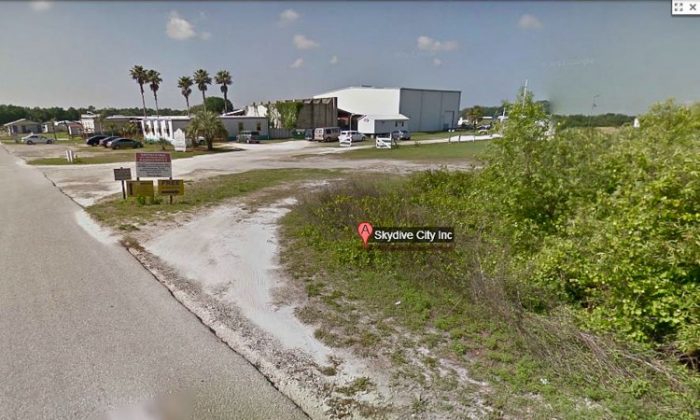 Two die skydiving: A Google Maps street view of Skydive City's base in Zephyrhills, Fla., the company that led an expedition March 23, 2013, in which two Icelandic jumpers died. (Screenshot via The Epoch Times)
US

Two die skydiving in Florida: An instructor and student, both from Iceland, went missing during a skydiving expedition outside Tampa, Fla. Saturday. Their bodies were found in a patch of forest later that evening.

Part of a 20-person skydiving expedition, two men went missing on Saturday morning south of Zephyrhills Municipal Airport about 30 miles outside Tampa, Fla. Their bodies were found at about 7:30 p.m., reports the Tampa Tribune.

Their identities have not been released as authorities notify their families. One was an instructor, the other a student; both were from Iceland.

The expedition was led by Skydive City. One of the company’s owners, T.K. Hayes, told the Tribune in 2010 that there had only been 10 or 12 deaths in the company’s 20-year history.

A 60-year-old woman died on a dive with the company in January last year after an equipment malfunction.

“Skydiving gets safer and safer every year,” Hayes said in the 2010 interview, “but it’s still an extreme sport.”

The United States Parachute Association (USPA) recorded 19 skydiving fatalities in the nation in 2012 out of about 3.1 million jumps. “Nearly the lowest rate in the sport’s history,” states the association’s website.

An investigation is ongoing to determine what went wrong in Saturday’s accident.