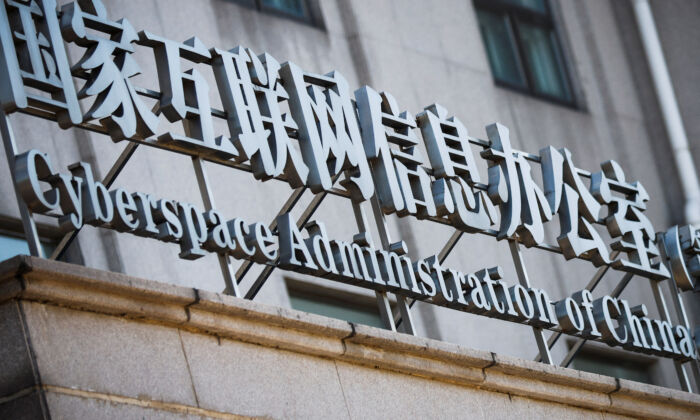 A sign above an office of the Cyberspace Administration of China (CAC) in Beijing on July 8, 2021. (Thomas Peter/Reuters)
China Business & Economy

The founder of a Chinese financial news media and a director of his company were reportedly sentenced to different imprisonment periods for alleged “illegal business operations.”

Wu Xiaopeng, the founder of Wallstreetcn.com, an online financial news media, was sentenced to two years and nine months, while Fan Dianhua, a director of the company, received a five-year prison term, according to Ittime.com.cn, a Chinese financial media company, on July 22.

They were held for criminal charges for a stock picking app launched in May 2017 without obtaining official approval, the Ittime report said.

Wallstreetcn.com’s website is at present in operation, its app is available for download, and its VIP membership is still open for subscription as of the publication of this article.

Wu was a Wall Street correspondent sent to work in the United States by the state-owned financial newspaper The 21st Century Business Herald from Apr 2006 to Sep 2012. He was “the first Chinese journalist to interview the previous Fed chairman, Ben Bernanke,” according to his company’s LinkedIn webpage.

Wu founded Wallstreetcn.com in 2010, and went back to China at the end of 2012. He and his founding team registered the company’s headquarters in Shanghai in May 2013. With the stock picking app launched in 2017, Wallstreetcn.com had 600,000 unique visitors and nearly 1 million followers on WeChat.

The total sum involved in the illegal securities business operation amounted to 75 million yuan (about $11 million), according to the Ittime report.

CCP Fears that Its Economic Lies will be Exposed: Expert

Frank Tian Xie, a John M. Olin Palmetto professor in business at the University of South Carolina Aiken, said in an interview with the Chinese language edition of The Epoch Times that the Chinese Communist Party (CCP) has always been afraid of its fake economic data being exposed.

“In China, politics and economy are closely linked,” Xie said, “those self-media report the true data of foreign countries, which serve as a reflection that the Chinese economy is in recession, which is of great concern to the CCP.”

The Chinese regime issued “Measures for the Supervision and Administration of the Directors, Supervisors, Senior Executives, and Practitioners of Securities and Fund Business Institutions” on Feb. 18, 2022, and put it into effect on Apr. 1. However, the regime had imposed censorship on the financial and business circles long before the implementation of these measures.

The Wallstreetcn website and its stock picking app were suspended from operation by China’s top cyberspace watchdog in June 2019. The cyberspace authority said in its notice that Wallstreetcn has “seriously violated China’s Cybersecurity Law and Administrative Provisions on Information Services of Mobile Internet Application Programs,” but did not provide details of the violations.

A notice posted by the company on June 10, 2019, stated that both the company’s official website and its app would be “offline for rectification” and that the company would “comprehensively strengthen website business and personnel management in a serious manner.”

In Sept. 2020, the website and the app resumed operation.

The stock picking app launched by Wallstreetcn invites financial and business influencers to publish analyses and forecasts on the stock markets and individual stocks and provide suggestions on buying and selling specific stocks.

A 2019 report by Radio Free Asia (RFA) revealed that Wallstreetcn was purged mainly because the website published an article on June 7, 2019, reporting a rising U.S. stock market, which offended the Chinese regime and was labeled “worshipping the U.S. and derogating China.” The Wallstreetcn’s report also pointed out that by July, the U.S. economy would record the longest expansion cycle in history.

The bullish wording on U.S. stocks angered the Chinese authorities, who believed that the company was not in line with the official propaganda rhetoric. China’s top cyberspace watchdog thus ordered Wallstreetcn’s internet access service to be cut off on June 10, according to the RFA report.

Over a dozen financial and business self-media were shut down before Wallstreetcn was suspended, and by the end of 2018, over 9800 self-media accounts had been closed by the regime, the RFA report said.

It is noteworthy that the content of the verdict of the Shanghai Huangpu District court on Wu and Fan first appeared in a report by Ifeng, an online news portal of state-owned Phoenix Television, on July 21, but only the title of the report is visible on Google. The article has been removed from the web page, which is marked “404” and says “The page you visited does not exist.”

Zhao Xinghong, a legal scholar at Peking University Finance Law Research Center wrote an article in 2005, titled “Crime of Illegal Operation: A Fuzzily Defined Offense that Urgently Needs to be Abolished.” He compared this crime literally to “a pocket crime,” explaining that the regime’s legal system uses this as a tool to charge any imprecisely defined offense.

To “realize the human rights protection function of criminal law,” Zhao wrote at the end of his article, “it is urgent to abolish the ‘infinite pocket crime’ of illegal business operations.”

The Epoch Times reached out to Shanghai Huangpu district court via its registered phone number, but could not get through after multiple efforts on July 22 and July 25. The publication also contacted Wallstreetcn for comment, and has received no reply as of the publication of this article.

Li Jing and Luo Ya contributed to the report.