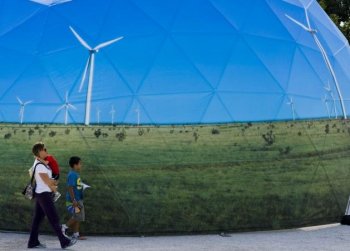 A family passes by one of the stands promoting green energy at the Climate Village in Cancun, Mexico, on Dec. 4. (Omar Torres/AFP/Getty Images)
Viewpoints

I’m not in favor of destroying the planet. I’ve lived on it all my life. And I’ve really become quite fond of it.

I’m not alone in that sentiment.

The global kabal have long been pushing a (somewhat manipulated) narrative that climate change is real, dangerous, and most of all man-made.

Basically, it’s the fault of all the modern conveniences that you and I enjoy, that have sprung from the fossil fuel-based economy the world has created over the past couple centuries.

Now, they say, that’s got to end, for the sake of the planet.

Going forward, we have to create a future of energy that uses descriptors like “sustainable” and “renewable,” even if they’re not really accurate.

They dedicate their lives to creating a clean, green future. Actually they’re all full of $#!%…

His family’s Gulfstream Aerospace G-IV made more than 16 trips in 2021. In fairness, not all were for his czarness. He leases it out through his charter company Flying Squirrel LLC.

It’s a well known fact that private jets put out as much as 40-times more carbon emissions as commercial flights.

When asked whether his flying private to Iceland (to accept an environmental award of all things) was sending the wrong message, Kerry replied: “If you offset your carbon, it’s the only choice for somebody like me, who is traveling the world to win this battle.”

Clearly a necessity as long as he offsets his carbon…

Last July, the European Commission, the overlords who make the rules for the European Union, proposed exemptions from the EU’s jet fuel tax for cargo-only flights—ostensibly on the grounds that they are classified as “business aviation.”

Can you guess what else is classified as business aviation and also in line for a tax exemption?

“Private jets will enjoy an exemption through classification of ‘business aviation’ as the use of aircraft by firms for carriage of passengers or goods as an ‘aid to the conduct of their business,’ if generally considered not for public hire. A further exemption is given for ‘pleasure’ flights whereby an aircraft is used for ‘personal or recreational’ purposes not associated with a business or professional use.”

Not only that, a study by the group Transportation and Environment also found some seafaring exemptions in the proposal as well: “… the proposed carbon pricing scheme (ETS) and the low GHG fuel standard (FuelEU Maritime) will only apply to ships above 5,000 GT and exclude a number of ship types such as offshore vessels, fishing vessels, and yachts.”

So, if one of your modes of transportation is made by Gulfstream or Sunseeker or the like, you should get a pass on the carbon tax.

What About Green Energy as an Investment?

Today, green investing is a big winner if you’re on the receiving end of the money—like the Al Gores of the world.

Most of us aren’t.

If you’re on the side that’s pumping money into these companies, then you should know that green energy, from a technological perspective, is really not ready for prime time.

Don’t get me wrong: There is a place for solar, wind, geo-thermal and the likes, just not as a reliable, main source of energy. And not in the near future.

So green investing rule No. 1: Do not fall victim to political arguments that are being represented as the “science” of green energy.

Green investing rule No. 2: Approach green investment opportunities with strict objectivity and a healthy dose of skepticism. If you’re looking to add some green energy to your portfolio, consider more established energy companies that are already profitable; companies like NextEra Energy, Enphase Energy, or SolarEdge Technologies.

They can tax and regulate fossil fuels into oblivion but that won’t make green a success. Only the market can determine that.