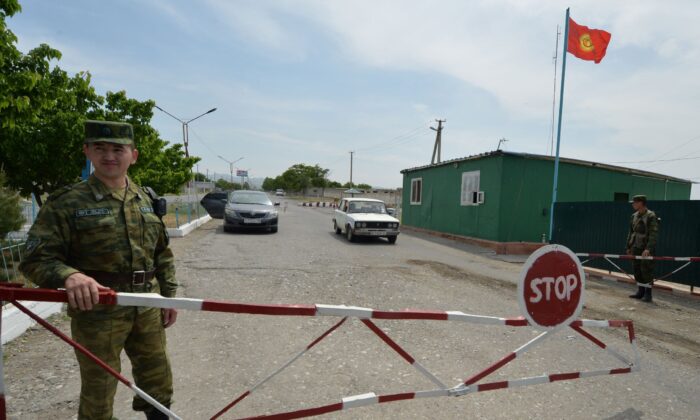 Kyrgyz border guards patrol at a border post in the village of Maksat, near the Kyrgyz-Tajik border, some 1,200 kilometers from Bishkek, on May 4, 2021. (Vyacheslav Oseledko/AFP via Getty Images)
Asia & Pacific

2 Reported Killed in Clashes Between Kyrgyz and Tajik Border Guards

The clashes came on the eve of a regional security summit, and a day after new fighting between Armenia and Azerbaijan raised fears of instability spreading to other parts of the former Soviet Union while Russian forces fight in Ukraine.

Kyrgyz border guards accused the Tajiks of having taken positions at a part of the border that has not been demarcated. The Tajik side said Kyrgyz guards had opened fire on a Tajik outpost without any provocation.

Clashes at the border occur regularly, and last year almost triggered an all-out war between Kyrgyzstan and Tajikistan, both allies of Russia that host Russian military bases.

Kyrgyzstan said at least two of its servicemen and two civilians were wounded, and that fire had also been exchanged in two other areas in Batken Province, a southern area bordering Uzbekistan as well as Tajikistan.

Russia’s Foreign Ministry urged both sides to “return the situation to the political and diplomatic arena and jointly prevent any kind of provocation,” adding:

“We express our readiness to assist the parties in reaching a long-term, mutually acceptable solution to border issues, using Russia’s rich experience in border demarcation, including with its Central Asian neighbors.

Kyrgyz media showed videos of residents of one border village leaving homes, saying they had been shelled from the Tajik side. Tajik media also showed children being evacuated from a school in a border village.

Kyrgyz and Tajik leaders are expected to attend a summit of the Shanghai Security Organisation in Uzbekistan this week alongside Russian President Vladimir Putin, Chinese leader Xi Jinping, and other regional leaders.