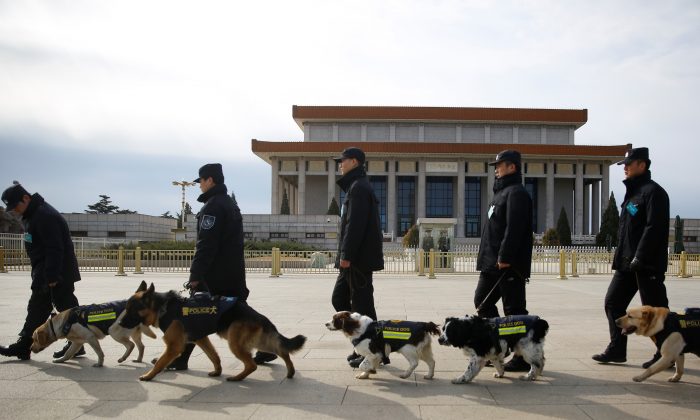 Police walk sniffer dogs outside the Great Hall of the People during the closing session of the Chinese People's Political Consultative Conference (CPPCC) in Beijing on March 15, 2018. (Thomas Peter/Reuters)
Chinese Regime

The heads of two local police stations in southern China’s Jiangxi Province were arrested Feb. 11 on suspicion of corruption.

The first suspect, Chen Yunnan, was chief of Tonggu County’s Public Security Bureau and is a former deputy mayor of Jiangxi’s Tonggu County. The other, Liu Jun, was police chief of Yihuang County; he also previously served as the county’s deputy mayor and Chinese Communist Party (CCP) secretary. Both were charged with accepting bribes.

The investigation of Chen began Aug. 15 last year. In December, he was stripped of his Party membership and official appointments.

The official announcement said Chen had colluded with others to cover up the facts during the investigation of his case. Major charges against Chen include abuse of public office for personal profit, as well as receiving bribes in the form of money, gifts, and travel arrangements.

According to authorities, Chen often took advantage of his position to benefit those who bribed him, as he held powers of final decision in criminal investigation, project approval, project bidding, cadre selection, and official promotion.

Chen was also accused of violating the law during law enforcement and acting as a “protective umbrella” for organized crime. He accepted money from criminal bosses even when he was leading investigations into crimes committed by local gangs.

According to the Baidu search engine, which lists the resumes of many high level officials, Chen had worked in the public security system of Jiangxi Province for 21 years, from his first position in public security as a section chief of the secretariat division of the Yichun City, to the deputy mayor of Tonggu County and county police chief, where he worked from October 2016 to June 2018.

In addition, Chen is on the investigation list of the World Organization to Investigate the Persecution of Falun Gong, an overseas nonprofit organization that documents the CCP’s campaign against members of the banned spiritual practice Falun Gong.

Chen participated in the persecution when he was the political commissar in the Domestic Security Division of the Yichun City’s police. Also on the list are Yuan Bin—who is Yichun City’s deputy police chief and the director of Yichun City’s 610 Office—and six other local police staff.

The 610 Office is the informal name of Party-led executive commission that is tasked with coordinating and directing operations against adherents of Falun Gong and other faith groups.

According to an Aug. 18, 2018 report by Minghui.org, a U.S.-based website that tracks the persecution of Falun Gong in China, adherents in Yichun had been detained and sentenced for their faith. Some have lost their lives due to persecution.

Per a recent Minghui report (published in Chinese), Chen was actively involved with the nationwide “knocking on doors” police campaign that was launched in 2017 to uncover Falun Gong practitioners across China. Officers conducted broad sweeps of addresses where practitioners were suspected to be residing, in order to arrest or harass them.

To carry out the campaign, Chen ordered the formation of a special cross-departmental team to search local Falun Gong practitioners across all neighborhoods and all villages of Tonggu County.

Liu Jun was dismissed from his public security position on Nov. 15 last year. According to online rumors, he was also charged with judicial corruption. In China, police and judges cooperate closely under the guidance of the CCP’s political and legal affairs system.

According to public announcement by the Chinese authorities, last year, more than 130 police chiefs and deputy police chiefs in the public security system were dismissed from office and subject to investigation, from the beginning of 2018 to Nov. 2, 2018.

Hundreds of thousands of people have been arrested and thousands are confirmed dead in the ongoing persecution of Falun Gong, which began in 1999 by order of then-Party leader Jiang Zemin, who believed the spiritual practice threatened the power of the CCP. In the nearly 20 years since, many officials in the public security system have been complicit in arresting and abusing Falun Gong practitioners.