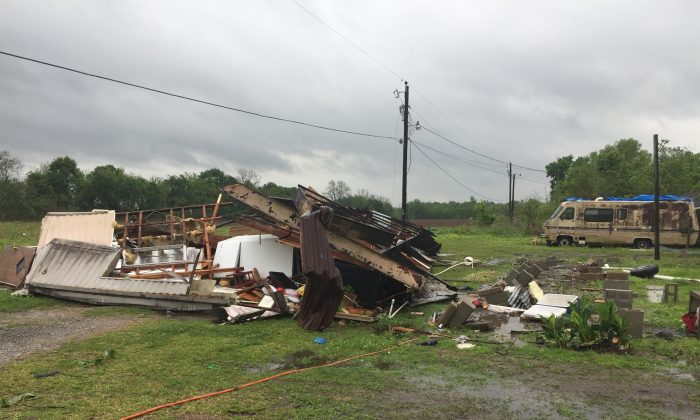 The remains of a trailer lie where a woman and her 3-year-old daughter were killed during a severe storm, in Breaux Bridge, La. on April 2, 2017. (Maj. Ginny Higgins/St. Martin Parish Sheriff's Office via AP)
News

A tornado flipped over a mobile home in south-central Louisiana on Sunday, killing a toddler and her mother, as forecasters warned of a dangerous weather system bringing twisters, fierce straight-line winds and hail to the Gulf Coast region.

Neville Alexander, 3, and Francine Gotch, 38, were inside the mobile home in the town of Breaux Bridge, just outside Lafayette, Louisiana, when the storm slammed into the dwelling, causing “significant damage,” the St. Martin Sheriff’s Office said on its Facebook page.

Video posted on the page showed the remnants of a mobile home with its walls and roof collapsed and furniture and other household belongings upended and scattered. Nearby houses and vehicles appeared unscathed.

The National Weather Service (NWS) later confirmed the demolished trailer was upended by atornado packing winds of around 100 miles per hour and ranked as a category EF-1 on the five-point Enhanced Fujita Scale. An EF-5 is the highest rating.

Louisiana Governor John Bel Edwards said the Weather Service had issued a “high risk” advisory for central and northern Louisiana, warning residents to be vigilant of the threat of severe weather.

Other parts of Louisiana were under “moderate and enhanced” alerts for severe weather, he said, adding, “This is a statewide weather event.”

In addition to tornado threats, thunderstorms were bringing hurricane-force, straight-line winds and large hail to the region, the governor said.

Television station WAFB-TV in Baton Rouge, the state capital, reported more than 4,500 lightning strikes across the state by late afternoon.

Edwards called for members of the public to remain indoors and avoid unnecessary travel, while urging mobile homes residents to stay with friends or relatives in more solid structures overnight if possible.

The NWS posted tornado watches for a portion of eastern Texas and most of the two neighboring Gulf states of Louisiana and Mississippi. A flash-flood warning was in effect for a large swath of east Texas and Louisiana.

Tornado sightings were reported in central Texas and north-central Louisiana, while high winds were snapping trees and causing other damage, the NWS reported.

The brunt of the storm system, also a concern for southern Arkansas, was expected to track eastward into Mississippi after dark, and possibly into Alabama on Monday morning.

The warnings come after severe weather killed at least 21 people in the South earlier this year, many in mobile homes demolished by tornadoes in Georgia and Mississippi.