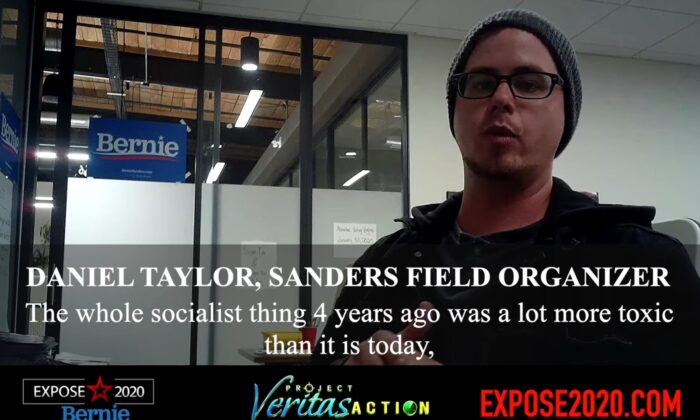 One of them, Daniel Taylor, expressed a belief that Sanders, a self-described democratic socialist, would be on board with more extreme actions akin to a revolution.

The other, Mason Baird, expressed a hope that violence against people wouldn’t be necessary, and destruction of property and intimidation by a “show of force” would suffice.

The video recordings were released by Project Veritas Action (PVA), a nonprofit that specializes in undercover reporting. The videos were part of a PVA series called “#Expose2020.” Three previous videos featured two Sanders campaign field organizers who said things such as “guillotine the rich,” “send Republicans to reeducation camps,” and “liberals get the [expletive] wall first.”

Baird was paid more than $1,800 by the Sanders campaign in September 2019. The fourth-quarter financials aren’t yet available on the Federal Election Commission website.

According to Baird, the Sanders campaign attracts people with extreme leftist views.

Part of the agenda, in Baird’s view, was to “abolish landlords” and “nationalize” large tech companies such as Google, Youtube, and Facebook.

The undercover reporter repeatedly prompted Baird to explain how the socialist agenda could be implemented over the inevitable objections of many Americans, particularly supporters of President Donald Trump.

“We would need a federal government and labor union movement that is working together to strip power away from capitalists and preferably directing that violence toward property,” Baird said. “At the end of the day, this stuff is gonna come out through practice, through the work.”

He envisioned a “coalition” of people whose “politics fall outside of the American norm.”

“Their politics are Marxist-Leninist, they’re anarchists, so these types of folks, they have more of a mind for ‘direct action’ for engaging in politics outside of the electoral system,” Baird said.

He said he wasn’t “excited about the prospect of armed struggle,” and that killing the “landlords” would be “damaging to the soul.”

“A militant labor movement is kind of our last real chance before we try other means,” he said.

In Taylor’s view, “extreme action” would be necessary regardless of whether Sanders wins the presidency.

“We have all this momentum, where do we go after it’s over, regardless of the outcome?” he said.

“Change is not gonna happen easily, regardless. Even if Bernie is elected, change will not come swiftly or easily, so the connections that we’re making now within the campaign, and with volunteers, and at events, it’s important that we retain that regardless of the outcome. It is unfortunate that we have to make plans for extreme action, but like I said, they’re not going to give it to us, even if Bernie is elected.”

“You all look so mild-mannered, but boy you’ve got fire in your belly, don’t you?” the reporter told Taylor at one point.

“Well, I think, you know, we don’t want to scare people off, so you kinda gotta feel it out first before you get into the crazy stuff,” he replied.

As an example, he referred to a previous conversation about “more extreme organizations” like “Antifa” and “Yellow Vests.”

“We’re kind of keeping that on the back burner for right now,” he said.

When the reporter asked whether Sanders would endorse more extreme actions, such as “a revolution,” Taylor said:

“Oh yeah, he has a history of protest, and that’s what makes him so attractive to a lot of the younger people who are fed up with bureaucracy. Bernie has been out there standing on the picket lines and doing the uncomfortable stuff. And [I] absolutely think he would endorse that kind of action because sometimes that’s what you gotta do to get it done.”

Taylor said that at least some of his motivation for helping the campaign was to spread the cause of socialism.

“For me personally, I have no problem going all-in on the campaign stuff because you are planting a seed. … The whole socialist thing four years ago was a lot more toxic than it is today,” he said.

The Sanders campaign and Baird didn’t respond to requests for comment. An attempt to reach Taylor for comment was unsuccessful.