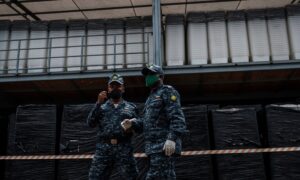 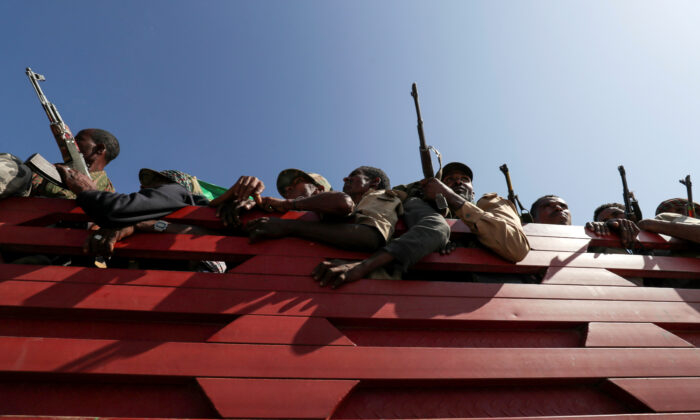 Members of Amhara region militias ride on their truck as they head to the mission to face the Tigray People's Liberation Front (TPLF), in Sanja, Amhara region near a border with Tigray, Ethiopia Nov. 9, 2020. (Tiksa Negeri//Reuters, File Photo)
Africa

ADDIS ABABA—Two airports in Ethiopia’s Amhara state which neighbors Tigray where federal troops are fighting local forces were targeted by rocket fire late on Friday, the government said, as an 11-day conflict widened.

The airport in Gondar in Amhara state, which neighbors Tigray, was hit on Friday, while another rocket aimed at the Bahir Dar airport missed the target, the government said.

“As long as the attacks on the people of Tigray do not stop, the attacks will intensify,” Getachew Reda, a spokesperson for the TPLF, said in a statement on the Facebook page of the Tigray state’s communications office.

Abiy sent the national defense force on an offensive against local troops in Tigray last week, after accusing them of attacking federal troops. Hundreds of people have been killed.

The prime minister has said government warplanes were bombing military targets in Tigray, including arms depots and equipment controlled by the Tigrayan forces. The government says its military operations are aimed at restoring the rule of law in the mountainous state of 5 million people.

One of the rockets hit the airport in Gondar and partially damaged it, said Awoke Worku, spokesperson for Gondar central zone, while a second missile fired simultaneously landed just outside of the airport at Bahir Dar.

“The TPLF junta is utilizing the last of the weaponry within its arsenals,” the Ethiopian government’s emergency task force wrote on Twitter.

The Amhara regional state’s forces have been fighting alongside their federal counterparts against Tigray’s fighters.

Yohannes Ayele, a resident of Gondar, said he heard a loud explosion in the Azezo neighborhood of the city at 10:30 p.m.

Another resident of the area said the rocket had damaged the airport terminal building. The area was sealed off and firefighting vehicles were parked outside, the resident added.

The United Nations, the African Union, and others are concerned that the fighting could spread to other parts of Ethiopia, Africa’s second-most populous country, and destabilize the wider Horn of Africa region.

More than 14,500 people have fled into neighboring Sudan, with the speed of new arrivals “overwhelming the current capacity to provide aid,” the UN refugee agency said on Friday.

Ethiopia’s Human Rights Commission, appointed by the government but independent, said it was sending a team of investigators to the town of Mai Kadra in Tigray, where Amnesty International this week reported what it said was evidence of mass killings.

Amnesty International said on Thursday scores and possibly hundreds of civilians were stabbed and hacked to death in the region on Nov. 9, citing witnesses. It said it had not been able to independently confirm who was responsible, but said the witnesses had blamed fighters loyal to Tigray’s local leaders.

The Tigray state government denied involvement in the reported killings.

“TPLF absolutely refutes allegations the TPLF members and the Tigray special police force were involved in this most tragic event,” it said in a statement.

The rights commission said in a statement it would investigate all allegations of human rights violations in the conflict.