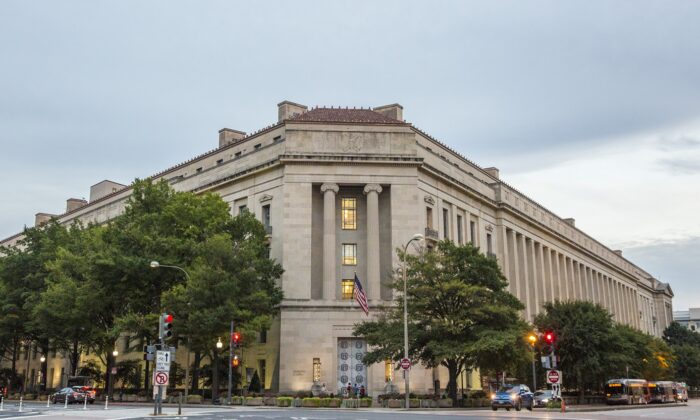 The long-delayed nominations of two key Department of Justice officials who will oversee the enforcement of civil rights and environmental laws were narrowly approved by the Senate on Oct. 11, over the strong objections of left-wing activists.

Although the Democrats’ ongoing, unprecedented blockade of President Donald Trump’s nominees across all agencies of the federal government continues, internal resistance within the Justice Department (DOJ) to Trump’s policy agenda is likely to be undermined to an extent, with the two new appointees in place.

Indeed, the confirmation of the two officials, both of whom were nominated in June 2017, may finally give the president firm control over two renegade divisions within the DOJ that are packed with career holdovers from the Obama administration. These staff members have gained a reputation for being more concerned with so-called social-justice activism than with simply enforcing the law and adhering to the tenets of the U.S. Constitution.

Eric S. Dreiband of Maryland was confirmed as assistant attorney general for civil rights in a 50–47 vote. Hours before that, the Senate voted by the same margin to end debate on the nomination and advance to the confirmation vote.

Jeffrey Bossert Clark of Virginia was confirmed as Assistant Attorney General for Environment and Natural Resources by a vote of 52–45. Sen. Joe Manchin (D-W.Va.) and Claire McCaskill (D-Mo.), who are both facing tough re-election fights in states that Trump carried in 2016, both voted “yea.” The Senate had voted 53–44 to end debate on Clark’s nomination, with Manchin and McCaskill again voting “yea.”

It took 21 months for Dreiband to be confirmed, compared to the nine months in President Barack Obama’s first term that it took the Senate to approve radical leftist Tom Perez to the same post. While in the position, Perez helped then-Attorney General Eric Holder carry out what conservatives characterize as a war on police, immigration-enforcement efforts, and electoral integrity.

Dreiband’s nomination is “the most important nomination of Trump’s, after court picks,” former Civil Rights Division attorney and bestselling author J. Christian Adams said in a brief statement emailed to The Epoch Times.

Adams hopes Dreiband will work to undo the damage he says Perez, who is now Democratic National Committee chairman, did to the division.

Perez “used the vast power of the Civil Rights Division to fundamentally transform the country,” Adams wrote in a Washington Times commentary earlier this year. Adams is also president and general counsel for the Public Interest Legal Foundation and author of the 2011 book “Injustice: Exposing the Racial Agenda of the Obama Justice Department.”

There is a great deal of work to be done. Perez refused to prosecute hate crimes committed against white Americans, helping to engineer the dismissal of a case involving two members of the New Black Panther Party, who had been accused of intimidating white voters in Philadelphia on Election Day 2008.

Perez helped to enact the Church Arson Prevention Act, which rested on the false premise that black churches were being targeted with disproportionate frequency by arsonists. He targeted then-Maricopa County, Arizona, Sheriff Joe Arpaio for legal harassment because he disapproved of Arpaio’s tough-on-crime approach, especially with respect to illegal aliens.

Perez favored the use of affirmative action in hiring at higher education and health care facilities. He compared bankers to Ku Klux Klan members. Bankers discriminate “with a smile” and “fine print,” but they are “every bit as destructive as the cross burned in the neighborhood,” he said.

Adams argued in his column that Dreiband and Clark are essential to returning federal law enforcement to the standards of the pre-Obama era normalcy:

“Messrs. Dreiband and Clark are not needed just to cancel these radical and environmentalist fifth columns. As the Justice Department continues to see trustworthiness slide with the Comey-Strzok-Mueller-McCabe drama, Trump voters want evidence at Justice that Mr. Trump won the election in 2016.

“The Civil Rights Division must fully reflect the results of the 2016 election, where a radicalized anti-police pro-illegal immigrant, anti-election integrity cabal is defanged for good.

“This goes beyond race-neutral enforcement of voting laws. It is more than ensuring equities in employment, education funding, religious liberty, and others. A full reset is necessary.

“The American people must be able to see that when civil rights are on the line, no matter how obscure or unpopular a protected position is, they will have backup in the form of DOJ attorneys when needed.”

Left-of-center advocacy groups typically characterize Dreiband as an enemy of minorities, the poor, and of civil rights in general. Meanwhile, conservatives say Dreiband will be a breath of fresh air at the Civil Rights Division—because he’s a principled conservative, as opposed to a leftist determined to radically transform the country.

In his legal career, Dreiband has stood up for religious freedom, arguing against the government forcing religious-minded employers to violate their conscience by providing employees with birth control.

Dreiband previously served as general counsel of the United States Equal Employment Opportunity Commission (EEOC), where he headed litigation teams charged with enforcing, among other things, the Civil Rights Act of 1964. Before that, he was deputy administrator of the Department of Labor’s Wage and Hour Division, where he enforced the Fair Labor Standards Act, the Family and Medical Leave Act, and other laws.

Clark is described by environmentalists as a friend of polluters.

Senate Minority Whip Dick Durbin (D-Ill.) painted an unflattering picture of Clark, describing him as “a favorite of the Federalist Society, having chaired that group’s environmental law and practice group.” His nomination has been “strongly opposed by groups that care about protecting the environment,” he told The Hill newspaper.

In remarks on the Senate floor this week, Durbin noted with disapproval that as a lawyer, Clark represented BP, which was responsible for the Deepwater Horizon oil spill of 2010. He also said Clark said in 2014 that the science of climate change was “contestable.”