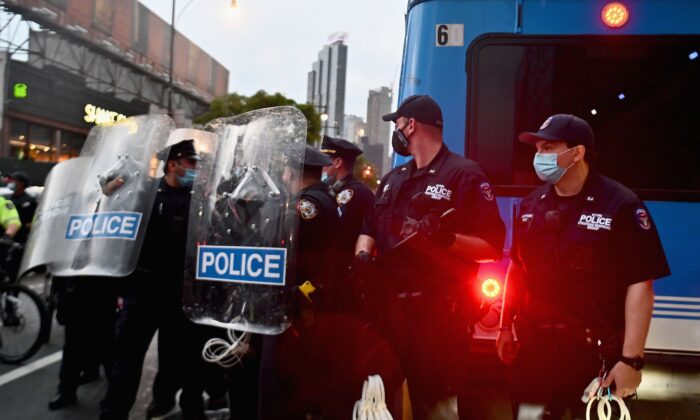 NYPD officers stand guard during a "Black Lives Matter" protest near Barclays Center in the Brooklyn borough of New York City on May 29, 2020. (Angela Weiss/AFP via Getty Images)
NY Politics

Two black lawmakers who said that they were rammed with bicycles while being surrounded by police during a Black Lives Matter protest last year, filed a federal civil-rights lawsuit against the city on Jun 28.

The legal action was taken by state Senator Zellnor Myrie and Assemblywoman Diana Richardson, both Democrats, for allegedly having their free-speech rights violated by police. It further claims that Myrie was pepper-sprayed and illegally detained.

The protest happened outside Barclays Center on May 29 Brooklyn last year.

“The experience was a painful and humiliating reminder that following the rules and complying with police orders does not protect Black Americans from police brutality, not even Black Americans who have ascended to elected office,” the lawsuit (pdf) reads.

Their lawsuit is requesting a trial by jury and names as defendants New York Mayor Bill de Blasio, NYPD Commissioner Dermot F. Shea, NYPD Chief of Department Rodney Harrison, and other officers that are accused of having taken part in the alleged assault.

“The N.Y.P.D. has a longstanding track record of successfully protecting the right of the public to protest while ensuring public safety, and is committed to strengthening those efforts,” Nick Paolucci, a spokesman for the city Law Department said, referring to the case in question. “We will review these claims.”