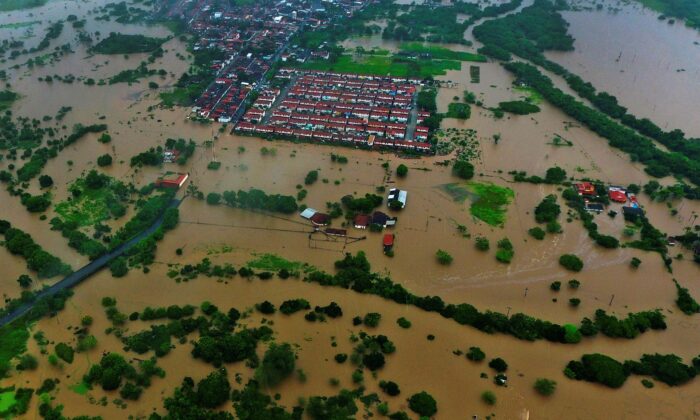 Aerial view of floods caused by heavy rains in the city of Itapetinga, southern region of the state of Bahia, Brazil, on Dec. 26, 2021. (Manuella Luana/AP Photo)
Americas

Two dams in the northeastern state of Bahia in Brazil collapsed over the weekend following weeks of heavy rains, affecting thousands of families who were forced to flee their homes.

The Igua dam, which is situated on the Verruga River near the city of Vitoria da Conquista in southern Bahia, gave way on Dec. 25, forcing the evacuation of residents, mainly from the town of Itambe.

A second dam broke due to rising water levels in Jussiape, 100 kilometers (about 60 miles) to the north, a day later, prompting officials to alert local residents to seek safety.

The city governments of both Jussiape and Itambe urged residents to move to safer grounds.

“A dam with a high volume of water has broken and a strong flash flood is expected to affect the municipality of Itambe in a few moments. All residents should evacuate from the banks of the river Verruga urgently,” said the city message on Instagram.

The Bahia state government’s press office said the Military Fire Department of Bahia has confirmed 18 deaths as a result of the heavy rains, while at least 50 cities have been affected since early November. It said more than 16,000 people are homeless, 19,580 displaced, and two people missing as a result of the flooding.

“At this first moment we’re acting to save people, to get people off the top of their houses, out of isolation, with boats,” Bahia Gov. Rui Costa said during a visit to an affected area on Dec. 26. Costa said officials are expanding care services and support to the cities, including food, mattresses, and warm clothing.

Infrastructure in the surrounding areas has been affected by the dam failures, with bridges and roads damaged and closed and a number of landslides reported.

“It is a gigantic tragedy. I don’t remember if, in the recent history of Bahia, there is something of that proportion due to the number of cities and houses involved. It’s something really scary, the number of houses, streets, locations completely under water,” Costa said.

Brazil’s National Institute of Meteorology (Inmet) and the National Center for Monitoring and Alerts on Natural Disasters (Cemaden) have warned about the risk of new floods and landslides in Bahia, due to accumulated rainfall in the past few years, according to Agencia Brasil.

The heavy rainfall coincides with the La Nina weather phenomenon, which began in 2020.