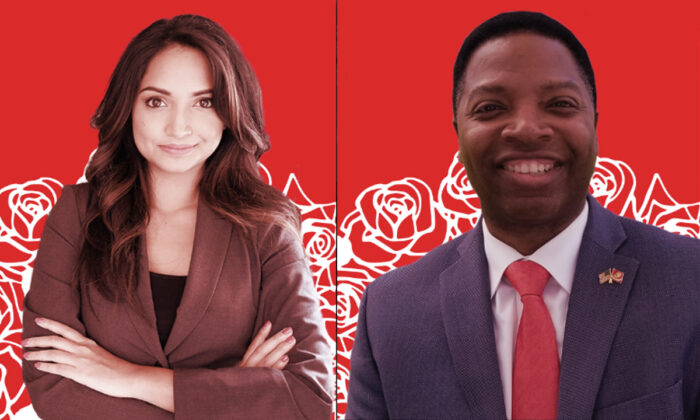 Two covert socialists are running for the U.S. House of Representatives from Georgia.

Both are active in the Democratic Party but have sought the endorsement and support of the several-hundred-strong Metro Atlanta Democratic Socialists of America (MADSA). However, neither is willing to publicly identify themselves to the voters as a “democratic socialist.”

Nabilah Islam is running for Georgia’s 7th Congressional District, located just to the north of Atlanta. The good people of North Central Georgia could soon be represented by a militant socialist in the mold of New York’s Rep. Alexandria Ocasio Cortez (D-N.Y.).

Several local news outlets and even the Washington Post have described Islam as “Atlanta’s AOC.” There’s one important difference, however. Possibly because Georgia is generally more conservative than AOC’s New York, Islam is not prepared to be quite as open about her socialism.

In February 2019, Republican Rep. Rob Woodall, who was first elected in 2010, announced he would not seek re-election in 2020. This has led to a crowded primary in which eight Republicans and seven Democrats, including 2018 candidate Carolyn Bourdeaux, have entered the race for the open seat.

Bourdeaux was supported in 2018 by gubernatorial candidate Stacey Abrams’ New Georgia Project. She lost to Woodall by less than 400 votes, so ordinarily would be considered frontrunner for this year’s Democratic nomination. However, Islam’s solid Democratic Party record and DSA backing combined with Muslim support could well see her win the May 19 primary. If that happens, the DSA and Muslim groups will likely pour in lots of out-of-state money and support to help her flip the very marginal “minority/majority” 7th District to the Democratic column.

A Georgia State University marketing graduate, Islam has an impressive record in Georgia Democratic Party politics. According to her 2016 Young Democrats of Atlanta bio:

“Nabilah ‘Billie’ Islam has deep political roots in Georgia where she has helped candidates up and down the ballot in multiple capacities. Billie is a Georgia native and currently serves as the Southern States Finance Associate for Hillary Clinton’s presidential Campaign, she has been on the campaign since May 2015 coordinating finance events for 7 states. During her time on the Finance Team for Jason Carter’s gubernatorial bid in 2014 Billie helped raise more than 10 million dollars in nine months.

“Billie’s first paid position on a campaign was in 2013 when she served as Campaign Coordinator for the successful city-wide campaign to elect Andre Dickens to the Atlanta City Council. It was in this position that she learned what it meant to be an underdog candidate and how much elbow grease it takes to win.

“Billie is a Democracy for America-trained operative, a graduate of VIP United Way and a graduate of the Gwinnett Neighborhood Leadership Institute. She has also served on the Board of the Red Clay Democrats. Committed to advancing Democratic causes in her home town, in 2013 she re-charted the Gwinnett County Young Democrats and served as President.”

Islam is running on a platform of socialized health care (Medicare for All), the Green New Deal, “economic justice,” and illegal immigrant amnesty. She has been endorsed by former President Jimmy Carter’s grandson Jason Carter, far-left California Congressman Ro Khanna, and the equally radical Occupy Democrats.

Despite this leftist support, Islam is not willing to publicly come clean as a “democratic socialist.”

“If elected will you publicly identify yourself as a Democratic Socialist and MADSA member?”

So while Congresswoman Islam might be willing to admit her DSA membership, if pressed, it appears unlikely she’ll be as up front about her “democratic socialism” as Ocasio Cortez or Michigan’s Rep. Rashida Tlaib.

MADSA is also endorsing Michael A. Owens for Georgia’s 13th Congressional District, which is located in the Atlanta Metropolitan area.

Owens is even less willing than Islam to publicly adopt the “democratic socialist” label.

When MADSA questioned him if he would publicly identify as a MADSA member and as a “Democratic Socialist,” Owens simply replied “no.” MADSA endorsed him anyway.

As the Republican Party struggles to take back the House in 2020 and the Democrats put major resources into flipping Southern states, Georgia’s 7th may become a very hotly contested and widely watched race.

Owens will have a harder job in the 13th to defeat moderate Democrat Scott—but with enough DSA support it could be done.

If both Republicans and moderate Democrats are bold enough to expose Islam and Owens’ covert socialism, they might just save their seats.