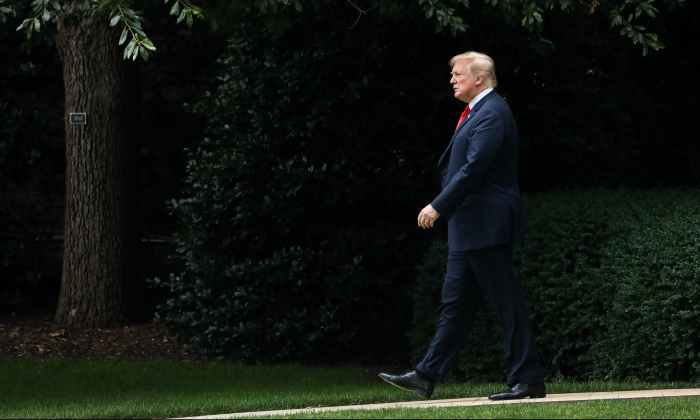 President Donald Trump before boarding Marine One on the South Lawn of the White House in Washington on June 27, 2018. (Samira Bouaou/The Epoch Times)
Trump Administration

Trump told reporters aboard Air Force One on July 5 that he has narrowed his list of contenders to replace Supreme Court Justice Anthony Kennedy to “three or two” names. The president said he would meet with Vice President Mike Pence over the weekend and then announce his choice at the White House at 9 p.m. on Monday, July 9.

The source said Trump was still considering Judge Amy Coney Barrett, who serves on the Chicago-based 7th U.S. Circuit Court of Appeals. But Trump has been asking more questions about Kethledge and Kavanaugh. Barrett has a less extensive judicial record than the other two.

Though it is unclear who the fourth justice on Trump’s shot list is, the top contenders, according to multiple reports, are judges Amul Thapar, Joan Larsen and Thomas Hardiman.

Trump said he was honored that Kennedy chose to retire during his term. Kethledge and Kavanaugh both served as clerks for Kennedy. Trump’s pick would be a nod to Kennedy’s legacy. Both are in their early 50s and could serve for decades once confirmed.

The president met with seven potential candidates this week, including two women. Trump may have firmed up his choice before departing for Montana on July 5 according to the source.

Trump’s nominee would replace Justice Kennedy, who announced his retirement in June. Although a conservative, Kennedy sided with the liberal side of the bench on several crucial cases, including rulings on same-sex marriage and abortion. Kennedy served nearly three decades on the Supreme Court.

Conservatives want Trump to pick a more solid conservative for Kennedy’s seat, a justice in the mold of the late Antonin Scalia, whose sudden death in early 2016 rocked the Supreme Court. Once confirmed, Trump’s pick would restore a 5-4 conservative majority to the nation’s top court.

The ages for both Kethledge and Kavanaugh would widen the gap between the average ages of the conservative and liberal sides of the bench. The four judges who were appointed by Democratic presidents have an average age of 71.5 years, almost five years more than on the Republican side. The appointment of either judge would broaden that gap to 10 years.

Kennedy was 80 when he announced his retirement. Justice Ruth Bader Ginsburg—a Democratic appointee and the Supreme Court’s most fervent liberal—is 84.

Trump said he knew that Kennedy was retiring six months before the justice made his exit public. The president is poised to reshape the court for what can be decades since Supreme Court appointments are for a lifetime term. Trump compares the significance of the opportunity to “war and peace.”

“Outside of war and peace, of course, the most important decision you make is the selection of a Supreme Court judge, if you get it,” Trump said. “As you know, there are many presidents who never get a choice.”

On July 1, Trump said he narrowed the search to five candidates from a list of 25, which was vetted by the conservative Heritage Foundation and the Federalist Society. The president described the potential picks as “outstanding.”

“It’s a great group of intellectual talent,” Trump said. “They are generally conservative.”

Kethledge, 51, was born in Summit, New Jersey, and grew up in Michigan. His grandfather invented an acoustically guided torpedo that sunk dozens of Nazi U-boats during World War II.

In one notable case, he ruled in favor of a conservative Tea Party group that had sued the IRS over alleged mistreatment during the Obama administration.

Kethledge is an originalist and a textualist, meaning that he is committed to interpreting the constitution as it is written and with the public meaning intended by the founding fathers.

In northern Michigan, Kethledge works out of an office he built in a family barn near Lake Huron. The office has a pine desk, a wood stove, and no internet.

In 2017, Kethledge coauthored “Lead Yourself First” a book which details how leaders can benefit from Solitude.

Kavanaugh, 53, was born in Washington. He graduated and received his law degree from Yale University.

Kavanaugh played a key role in drafting the Starr report, which urged the impeachment of President Bill Clinton. He also led the probe into the suicide of Clinton aide Vincent Foster and worked on the Clinton-linked Whitewater investigation.

George W. Bush nominated Kavanaugh to the federal bench in 2003. The nomination was stalled for three years. The Senate confirmed him in May 2006.

In one recent case, which is still under submission, Kavanaugh relentlessly questioned a lawyer for The Washington Metropolitan Area Transit Authority, which had vetoed a Christmas ad from the Catholic Archdiocese of Washington. Kethledge described the rejection of the ad “pure discrimination” and “odious to the Constitution.”

Barret clerked for late Supreme Court Justice Scalia, a constitutional conservative. After her clerkship, Barrett worked in private practice and moved on to become a law professor at the Notre Dame Law School.

Trump nominated Barrett for to the federal bench in May last year. Her confirmation hearing drew national attention after Democratic Sen. Diane Feinstein drew improper focus to Barrett’s deep Catholic faith, telling the nominee that “the dogma lives loudly within you.”

The Senate confirmed Barrett in October 2017. She was one of five conservative justices added to Trump’s list of candidates in November. Barrett is a mother of seven children, including a special needs child and two children adopted from Haiti.

Like to Kethledge and Kavanaugh, Barret is a textualist.

In addition to the two Supreme Court picks, Trump has been nominating judges to lower federal courts at a rapid pace, establishing a judicial legacy that would last fore years before his term.

The president nominated a total of 143 judges to date. The Senate has so far confirmed 45 of those nominations.