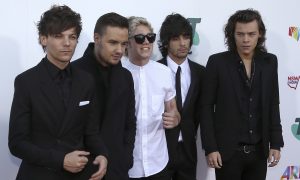 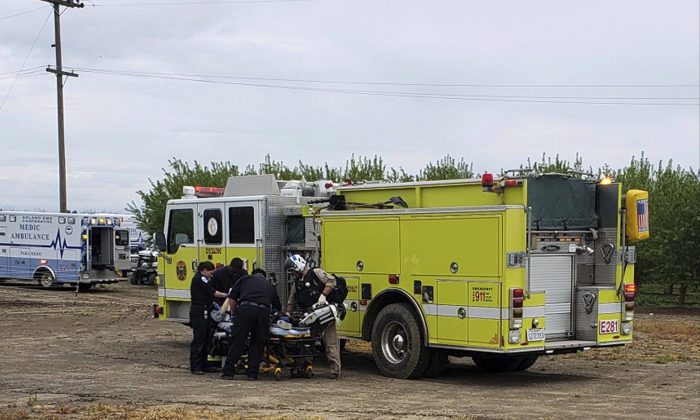 Fire and medical officials attend to one of two teenage boys who were electrocuted while trying to rescue a dog from an irrigation canal at an orchard in Dixon, California, on April 1, 2019. (California Highway Patrol/Via AP)
Crime and Incidents

Two teenage boys who jumped into a Northern California irrigation canal to rescue a dog were killed when they grabbed onto an electrified bridge, according to reports.

Officials with the Solano County Sheriff’s Department were cited by The Sacramento Bee as saying on April 2 that Jacob Hourmouzus and Jacob Schneider died of electrocution.

The two 17-year-olds were transported to an area hospital and later died of their injuries.

Citing an SCSD news release, the publication reported that Hourmouzus and Schneider, along with two other teenagers and the dog, were crossing a bridge over the canal on Monday afternoon when the animal either jumped or fell into the water.

The two boys leaped into the fast-flowing water to save the dog.

When they tried to pull themselves out of the canal, however, they gripped a part of the bridge that had an electric current running through it.   Hourmouzus and Schneider were unable to let go of the bridge rail because the current had frozen their grip to it.

“When he touched that rail, what I understood is that’s where he stayed—right there, he could not get off of it,” Gus Carrillo, Hourmouzus’s stepfather, told Fox40.

Only when another teenager jumped into the water to dislodge the boys from the bridge were they able to break free.

A teenage girl, meanwhile, called 911. By the time authorities arrived, the third teenager managed to pull his friends and dog to shore.

The dog suffered unspecified injuries, but survived, according to Fox40.

The Bee reported that sheriff’s officials are investigating why electricity was running through the bridge, located in Dixon, about 23 miles southwest of Sacramento.

Technicians from Pacific Gas and Electric Co. were called to the scene and cut off electricity to the bridge, according to the report.

A representative of the company was cited by the Bee as saying that none of its equipment was involved in the incident.

Candy Carrillo, Hourmouzus’s mother, told the publication that more could have been done to prevent the tragedy.

School principal Stephanie Marquez was cited by Fox40 as saying counseling would be available for classmates.

A vigil was held in Dixon on Tuesday night, attended by over 300 mourners.

Contact with electricity can result in burns, shocks, and death.

According to an electrical safety advisory published by Alliant Energy, “If the electricity is strong enough, muscles tighten so much that a person can’t let go.”

“Anyone who touches someone who is being shocked can become part of the circuit. That’s why you should never grab anyone who’s been shocked.”

The United States Department of Labor calls the threat of electrocution one of the construction sector’s “Fatal Four” hazards to life.

The other three fatal hazards are: Falls, Struck by Object, and Caught-in/between.

Data compiled by the Bureau of Labor Statistics notes that for 2017, the top factors causing death in construction were Falls (39.2 percent), followed by being Struck by Object (8.2 percent ), and then Electrocution (7.3 percent).

These “Fatal Four” were responsible for more than half (59.9 percent) of the construction worker deaths in 2017, BLS reports.

The Occupational Safety & Health Administration has published an advisory to minimize the risk of death or injury by electrocution.

“Assume that all overhead wires are energized at lethal voltages. Never assume that a wire is safe to touch even if it is down or appears to be insulated.

“Stay at least 10 feet (3 meters) away from overhead wires during cleanup and other activities. If working at heights or handling long objects, survey the area before starting work for the presence of overhead wires.

“If an overhead wire falls across your vehicle while you are driving, stay inside the vehicle and continue to drive away from the line. If the engine stalls, do not leave your vehicle. Warn people not to touch the vehicle or the wire. Call or ask someone to call the local electric utility company and emergency services.

“Never operate electrical equipment while you are standing in water.

“Never repair electrical cords or equipment unless qualified and authorized.

“Have a qualified electrician inspect electrical equipment that has gotten wet before energizing it.

“If working in damp locations, inspect electric cords and equipment to ensure that they are in good condition and free of defects, and use a ground-fault circuit interrupter (GFCI).

“Always use caution when working near electricity.”