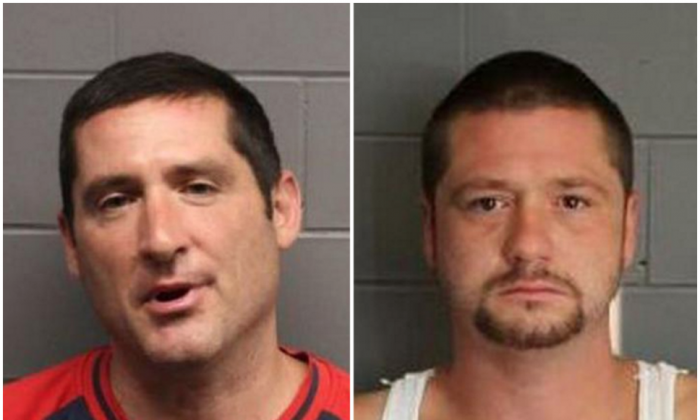 Scott Leader (L) and Steven Leader were sentenced on May 17 for a hate crime after beating a Hispanic man last August. The pair claim the attack was inspired by rhetoric of Donald Trump's.(Suffolk County District Attorney's Office)
Crime and Incidents

Brothers Scott, 38, and Steve Leader, 30, were accused of beating and urinating on a homeless Mexican man in Boston last August.

On Tuesday, both men were sentenced after pleading guilty.

When they were arrested a day after the incident, the men told police: “Donald Trump was right, all these illegals need to be deported,” according to prosecutors.

A witness recording seeing one of the men take a metal pole and strike the victim with it repeatedly, then the two assailants walked away laughing.

The men also threatened police while in custody and believed the attack was justified because the victim was Hispanic and homeless.

“This unprovoked attack on a sleeping man disgusted every prosecutor, victim advocate, and trooper who worked on it,” Suffolk County District Attorney Daniel F. Conley said. “State prison was the only appropriate sentence.”

The victim, Guillermo Rodriguez, was asleep in a subway station at the time. According to court documents, the men attacked him because they felt was an illegal immigrant—but Rodriguez, said in a statement that he is a permanent U.S. resident.

“I still feel pain all over my body from this incident,” the victim, then 58, wrote. “I don’t think my fingers will ever be the same. I came to this country many years ago and worked hard in the farm fields to provide produce to people here. I actually became a permanent resident of this country years ago, although if I had been undocumented I still would not have deserved to be beaten this way.”

Scott was sentenced to 3 years behind bars, while Steve faces 2 and a half years. Both men will serve 3 years probation after their time in jail, according to a Suffolk County District Attorney’s Office statement.

When asked what he thought of the attack at the time, Donald Trump said his supporters had been acting out of “passion.” Trump has since deemed the attack “terrible.”