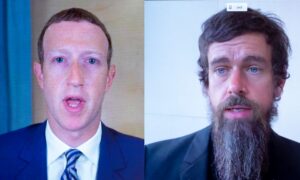 In this photo illustration, a Twitter logo is displayed on a mobile phone with President Trump's Twitter page shown in the background in Arlington, Va., on May 27, 2020. (Olivier Douliery/AFP via Getty Images)
Social Media

Twitter on Nov. 12 said that it labeled approximately 300,000 tweets as containing content that was “disputed and potentially misleading” during a two-week period covering the election.

In a blog post published Thursday titled “An update on our work around the 2020 US Elections,” the company said it is still seeing record levels of election-related conversation on Twitter and wanted to provide an update about its ongoing work to actively enforce its rules to “protect the integrity of this public conversation.”

The site says it labeled some 300,000 tweets as part of its Civic Integrity Policy. That amounts to around 0.2 percent of the total number of election-related tweets sent during that two-week period.

Of those tweets, 456 were also covered by a warning message and had engagement features limited, meaning tweets could be quote tweeted but not retweeted, replied to, or liked.

Approximately 74 percent of users who saw the flagged tweets viewed them after the label or warning message was applied, Twitter said. The analysis focused on tweets about the U.S. election from Oct. 27 to Nov. 11.

“These enforcement actions remain part of our continued strategy to add context and limit the spread of misleading information about election processes around the world on Twitter,” Vijaya Gadde and Kayvon Beykpour, who respectively lead Twitter’s legal and product teams, wrote.

“We also want to be very clear that we do not see our job as done—our work here continues and our teams are learning and improving how we address these challenges,” continued, adding, “We’ll be sharing a comprehensive report on the election early next year.”

Over the past few weeks, Twitter has issued a number of warnings to Donald Trump’s account regarding his accusations of voter fraud in the presidential election. According to The New York Times, just over a third of Trump’s tweets between Nov. 3 and 6 were hit with such a warning.

Trump and a number of other Republicans have said Twitter’s fact-checking efforts suppress conservative voices.

Also in the blog post, Twitter announced it will be keeping some of the election-related changes in place for the foreseeable future, including prompting users to add context to tweets before retweeting them in an effort to prevent the spread of misinformation.

Twitter said it had observed a 23 percent decrease in retweets and a 26 percent increase in quote tweets since making this change, but on a net basis, the overall number of retweets and quote tweets combined decreased by 20 percent.

“In short, this change slowed the spread of misleading information by virtue of an overall reduction in the amount of sharing on the service. We are taking more time to study and fully understand the impact of this change and are leaving it in-place for now,” they added.

The social media site will resume recommending tweets from people that users don’t follow and will end the requirement that trends must have explanations before they can land in “For You” suggestions.