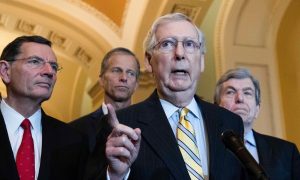 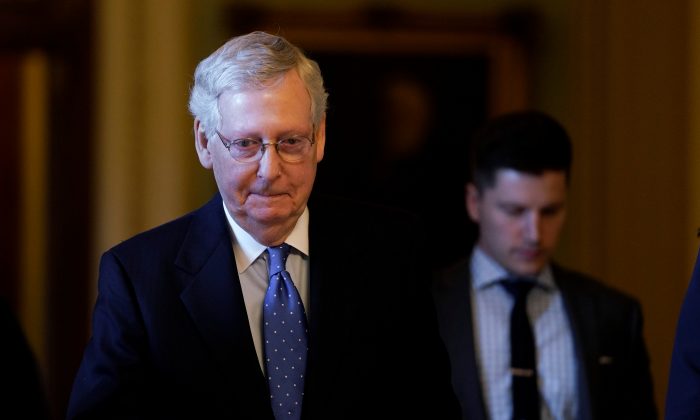 Senate Majority Leader Mitch McConnell walks off the Senate floor after making comments about Special Counsel Robert Mueller's report on the 2016 election on Capitol Hill in Washington on May 7, 2019. (Aaron P. Bernstein/Reuters)
Politics

Twitter locked one of Sen. Mitch McConnell’s (R-Ky.) accounts on Aug. 7 after it posted a video showing protesters outside the majority leader’s home in Louisville threatening him.

A Black Lives Matter activist was among those outside. Chanelle Helms said that McConnell should be stabbed in the heart and at another point said she wished he had broken his neck when he fell over the weekend outside the house.

Helms and other protesters unleashed profanity-riddled statements during the protest and the official McConnell campaign account posted the video to its page to highlight their behavior.

According to a message the company sent to Kevin Golden, one of the people behind the account, it “determined that this account violated Twitter rules.” The violation appeared to be the video that showed protesting cursing and threatening the senator.

Golden said that the account was locked “for posting the video of real-world, violent threats made against Mitch McConnell.”

“This is a problem with the speech police in America today,” Golden told Politico. “Twitter will allow the words ‘massacre Mitch’ to trend nationally on their platform. But locks our account for posting actual threats against us.”

The action by Twitter is one of the most dramatic involving conservatives, which the company has an admitted bias against. McConnell is one of the most powerful Republicans in the country, overseeing a Senate majority and, in some cases, working closely with President Donald Trump.

McConnell, 77, was recovering at his Louisville home after fracturing his shoulder over the weekend, tripping on the patio outside.

The video was also shared by Ryan Saavedra of the Daily Wire, who said that Twitter wanted him to delete the tweet sharing the footage and that he declined, prompting the social media company to temporarily suspend him.

By suspending McConnell’s re-election campaign for exposing the violent rhetoric directed at McConnell, which was allowed to foment on Twitter for days, Twitter is interfering in the 2020 elections in a manner to help Democrats and hurt Republicans

Yesterday @twitter allowed a Dem Prez campaign (Castro) to publish names of Trump donors in TX in hopes an angry mob would form.

“By suspending McConnell’s reelection campaign for exposing the violent rhetoric directed at McConnell, which was allowed to foment on Twitter for days, Twitter is interfering in the 2020 elections in a manner to help Democrats and hurt Republicans,” Saavedra wrote.

“By suspending me for telling the truth, Twitter is making it clear that they seek to control the news media and only allow content on their platform that does not expose the evil, projection, and hypocrisy of the political left. Do not be surprised if they permanently ban me.”

Ben Goldey, Capitol Hill communications director, said that he was also locked out of his account for posting a snippet of a video of protesters outside the house.