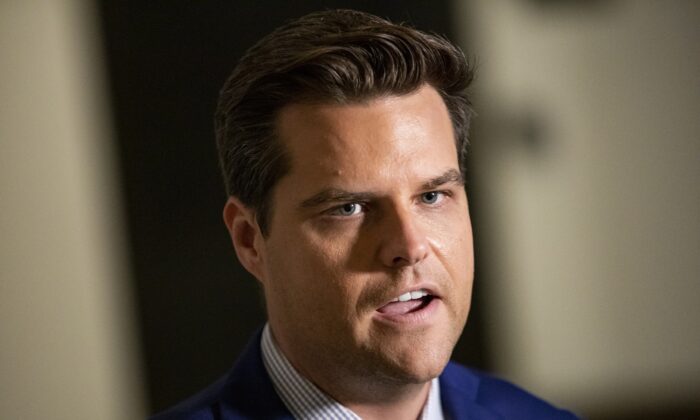 Twitter continued to censor top U.S. officials this week as it flagged a post by Rep. Matt Gaetz (R-Fla.), claiming the missive was “glorifying violence.”

“Now that we clearly see Antifa as terrorists, can we hunt them down like we do those in the Middle East?” Gaetz wrote in the tweet.

“However, Twitter has determined that it may be in the public’s interest for the Tweet to remain accessible,” the social media company stated.

Gaetz, a second-term congressman, said in response: “Their warning is my badge of honor.”

“Antifa is a terrorist organization, encouraging riots that hurt Americans. Our government should hunt them down. Twitter should stop enabling them. I’ll keep saying it,” he said on Twitter.

Sen. Chris Murphy (D-Conn.) was among those calling on Twitter to take Gaetz’s tweet down entirely instead of keeping it up and hiding it. Survivors of mass shootings, he said, were contacting him.

“They are scared to death this will inspire someone to start shooting into a crowd tonight. They are right,” he said.

Gaetz called the statement “woke virtue signaling,” and said: “Governments go after terrorists. Individuals don’t. We–the government–should continue to do so. And Antifa is rightly on the list! Speak against riots hurting Americans.”

Gaetz and a host of other officials, including President Donald Trump, have said they’re targeting the special status conveyed upon Twitter and other social media platforms in the wake of proven bias and censorship from the companies.

Twitter launched itself into the political fray last week by hiding one of Trump’s tweets, claiming the missive was “glorifying violence.”

“These THUGS are dishonoring the memory of George Floyd, and I won’t let that happen. Just spoke to Governor Tim Walz and told him that the Military is with him all the way. Any difficulty and we will assume control but, when the looting starts, the shooting starts. Thank you!” Trump wrote in the post in question.

The action came after Twitter placed a so-called fact check on one of Trump’s posts. The company had to alter the fact check because it contained factually incorrect information.

Twitter CEO Jack Dorsey said Twitter “will continue to point out incorrect or disputed information about elections globally. And we will admit to and own any mistakes we make.”

Trump signed an executive order aimed at preventing online censorship, triggering federal reviews of spending on the platforms, federal investigations into forms of political censorship, and other measures.

Correction: A previous version of this article misstated how long Rep. Gaetz has been in office. The Epoch Times regrets the error.