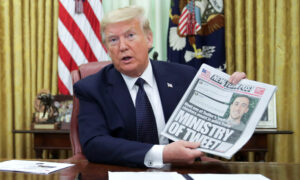 President Donald Trump issued an executive order to prevent online censorship, and heavily targeted at social media giants Facebook, YouTube, Twitter and Instagram. Trump accused some of the platforms of political censorship, possible election interference, and for allegedly accepting money from foreign governments such as China to publish disinformation.

The executive order will remove the liability shield given to social media platforms if they engage in censorship or any form of “political conduct.” It will also include federal reviews of spending on these platforms, federal investigations into various forms of political censorship, proposals for new state laws to protect online speech, the drafting of federal law that could cement the new protections on free speech online, and more.

In this episode of Crossroads, we’ll go over the full executive order and how it could change public discourse online.