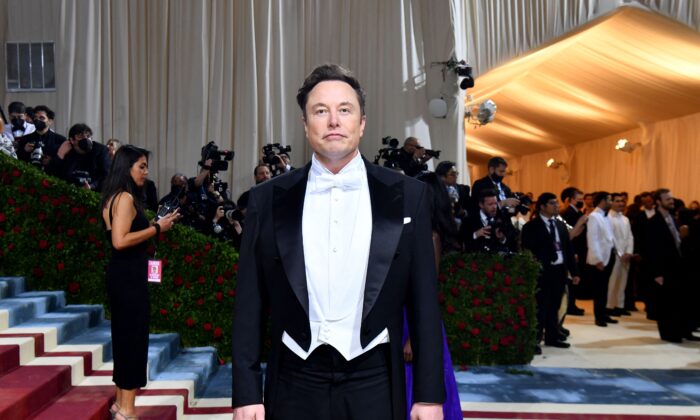 CEO and chief engineer at SpaceX Elon Musk arrives for the 2022 Met Gala at the Metropolitan Museum of Art in New York on May 2, 2022. (Angela Weiss/AFP via Getty Images)
Economy

Twitter Gives Its Version of Events: Elon Musk Didn’t Carry out Due Diligence in Rush to Grab $44 Billion Deal

Details surrounding Elon Musk’s deal to take Twitter, Inc. private are getting murkier each passing day. A new SEC filing by the social media platform to highlight its version of events suggests Musk jumped the gun in his quest to quickly lap up the company.

Musk was apparently in a hurry to get the deal done and suggested on April 21 that his acquisition proposal was “no longer subject to the completion of financing business due diligence,” preliminary proxy statement filed by the social media platform ahead of the special meeting of shareholders said.  This may have been due to the fact that Musk had already rallied around financing partners to fund the deal, according to Twitter’s version.

Due diligence is a key step in M&A transactions as it de-risks the transaction for the potential buyer and provides the seller with information on the proper valuation of the business.

Giving the rationale behind embracing Musk’s offer, Twitter said it assessed that other parties were unlikely to be interested in or have the capability to acquire the company. Additionally, the company deemed that other potential acquirers would require substantial due diligence, potentially delaying the deal.

Twitter also suggested that it was held back by the fear that negotiation with others could jeopardize the clinching of a deal with Musk at the price offered by the latter. The entire negotiations were crammed into two days—between April 23 and 24—starting from Musk contacting Twitter chairman Bret Taylor to Musk’s outside legal counsel delivering an initial draft of the merger agreement to the two parties to negotiate the transaction.

The take-private deal was clinched for $54.20 per share or $44 billion and publicly disclosed on April 25. The preliminary proxy statement noted that the special shareholder meeting will be held virtually on an undecided date.

At the special meeting, Twitter will recommend shareholders adopt the merger agreement and approve compensation for its executives in connection with the merger.

Ever since Musk’s interest in Twitter became public knowledge, opposition to the deal has been mounting, primarily due to fears that the Tesla CEO’s self-proclaimed advocacy of free speech would make minorities vulnerable on the platform.

Meanwhile, Musk, on his part, had to go the hard mile in mobilizing finances for the deal. After all this, Musk sent shockwaves earlier this week by suggesting that the deal is put on hold.

Discord between the Tesla CEO and Twitter over the count of spam or bot accounts has been cited as the reason. While Twitter maintains the metric as less than 5 percent of its users, Musk’s estimate puts the number at least four times above this.

The Twitter proxy statement does not mention any closing condition imposed by Musk, including the spam account issue. Musk ran a poll on Tuesday about whether 95 percent of daily active users are real, unique humans. Future Fund co-founder Gary Black took to Twitter to remind that the whole pursuit of Twitter began with a poll. “Hopefully he uses the results to walk away from $TWTR deal, which would be bullish for $TSLA,” he said.

I’ve learned to be wary now when Elon runs a poll. Hopefully he uses the results to walk away from $TWTR deal, which would be bullish for $TSLA SHs. pic.twitter.com/BetYxIgW8g

Prominent Tesla bull and Wedbush analyst Daniel Ives said Musk could be using the bot issue as an excuse to walk away from the deal. He suggested that the Tesla CEO’s dithering may have to do with the “changing stock market/risk environment the last month, and a number of other financing factors.” Musk brought up the possibility of a lowered offer for Twitter at a conference in Miami.