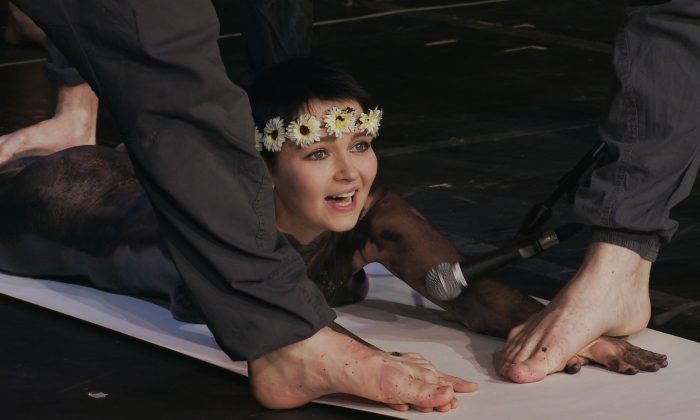 You can judge the legitimacy of Belarus president-for-life Alexander Lukashenko’s latest “re-election” by the countries that sent their congratulations: Venezuela, Syria, Russia, China, and deposed Ukrainian president Viktor Yanukovych. For many, it was just business as usual in what has been dubbed “Europe’s Last Dictatorship.”

However, it was an outrageous affront to independent-thinking Belarusians, like the underground Belarus Free Theatre (BFT). Filmmaker Madeleine Sackler provides an uncensored chronicle of the activist artists’ annus horribilis in “Dangerous Acts Starring the Unstable Elements of Belarus.”

In a state as pervasively regulated as Belarus, any theater group that forthrightly holds a mirror up to society will have to operate outside the official arts bureaucracy, in direct defiance of the law. The small rag-tag troupe was accustomed to a routine level of surveillance and harassment, but the presidential election on Dec. 19, 2010, precipitated a nationwide reign of terror.

Co-founders Natalia Koliada and Nicolai Khalezin were close family friends of Andrei Sannikov, the leading opposition candidate everyone expected to win the presidency if the elections were even remotely fair. That did not happen. Although tens of thousands of protesters demonstrated on Liberty Square, the regime responded with violence, imprisoning Sannikov and six other opposition candidates.

Fortunately, most of the BFT were able to evade the KGB (yes, they retained those charming initials), ironically fleeing through Russia. However, the time away from their homeland and families takes a toll on them. The only way they know how to process it is through their art.

Classifying the BFT is a tricky proposition. Many of the productions that Sackler documents are distinctly avant-garde, rather closely akin to the style of Poland’s formerly dissident Theatre of the Eighth Day. Yet, sometimes their performances are painfully intimate and achingly accessible.

Frankly, the film’s most intense and devastating sequence does not feature the brutal violence unleashed by the KGB (though there is a good deal of that, and it is truly appalling). Instead, a monologue written by featured actor Oleg relating the nonpolitical circumstances surrounding a personal tragedy truly leaves audiences emotionally staggered.

Nevertheless, when performing under a regime that prohibits open discussion of mental health, suicide, drug use, and sexuality, the personal becomes perversely political. Sackler and her editors Anne Barliant and Leigh Johnson show Solomon-like judgment, perfectly balancing the political and the artistic, the national and the individual, the macro and the micro.

A lot of courage went into the making of “Dangerous Acts,” starting with the BFT, but also including the Belarusian cinematographer who Sackler directed via Skype and the small army of eye-witnesses and netizen-journalists who contributed protest-crackdown footage.

To her credit, Sackler has tackled some bold subjects, following up her first-rate charter school documentary, “The Lottery,” with the censorship-defying “Dangerous Acts.” As a result, she might be one of the few people who can say which is more ruthless in protecting their power, Lukashenko or the New York teachers union. Both tell critically important stories, but “Dangerous Acts” has even more urgency.

Highly recommended for all lovers of liberty and advocates for human rights, particularly on the weekend we celebrate our independence, “Dangerous Acts Starring the Unstable Elements of Belarus” premieres Monday, July 7, on HBO with further air dates scheduled for July 9, 10, 13, 16, 19, and 25.