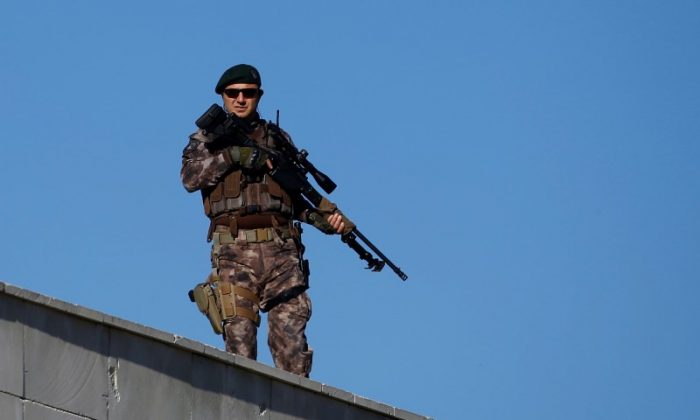 A member of police special forces stands guard during a trial for soldiers accused of attempting to assassinate Turkish President Tayyip Erdogan on the night of the failed last year's July 15 coup, in Mugla, Turkey, Oct. 4, 2017. (Reuters/Osman Orsal)
By Reuters

ISTANBUL—Turkish police have detained 47 people in an operation targeting alleged supporters within the army of a network accused by Ankara of orchestrating a failed military coup two years ago, private broadcaster CNN Turk said on Saturday.

The operation, which began on Tuesday, targeted 124 people accused of being followers of exiled rival Islamic preacher Fethullah Gulen who has lived in Pennsylvania in the United States since 1999, CNN Turk said.

Ankara accuses Gulen of being behind the abortive putsch on July 15, 2016, a charge he condemned “in the strongest terms” and said unequivocally that he was in no way involved.

The suspects were said to have operated as religious guides for high-ranking military personnel, it said. The operation, which focused on the central Turkish city of Konya and was spread over 31 provinces, comes ahead of Sunday’s presidential and parliamentary elections in Turkey.

Turkey has detained 160,000 people and dismissed nearly the same number of state employees since the coup attempt, the U.N. human rights office said in March. Of that number, more than 50,000 have been formally charged and kept in jail during trial.

Critics of President Tayyip Erdogan say he has used the failed putsch as a pretext to quash dissent. Turkey says the measures are necessary to combat threats to national security.

Erdogan, who has dominated Turkish politics for a decade and a half, is tipped to win the presidential election but possibly only in a run-off set for early July, opinion polls suggest.