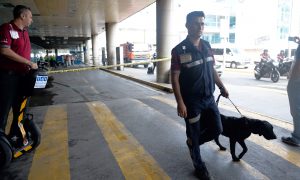 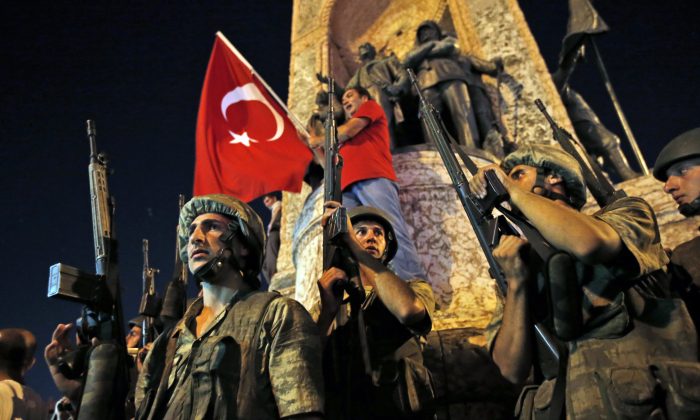 UPDATE: Turkish President Recep Tayyip Erdogan has returned to Istanbul from the tourist resort of Marmaris where he had been staying when a faction within the military attempted to take over the country.

Turkish media report that soldiers supporting the coup made an unsuccessful attempt on the president’s life, shooting at his hotel from helicopters. Armed soldiers later blockaded the hotel after Erdogan left for Istanbul. Some police officers were injured during the incident.

Upon his return to Istanbul, Erdogan vowed to punish those responsible for the attempted coup that saw a night of fighting and chaos in Turkey.

Turkish Prime Minister Binali Yildirim said that so far 120 military officers allegedly involved in the coup have been arrested.

“Things are getting better every minute,” said Yildirim.

Turkish broadcaster NTV reports that at least 42 people were killed in Turkey’s capital Ankara during the attack on Golbasi Special Forces Department headquarters. These figures are only from this one incident. The death toll from other incidents has yet to be confirmed.

A faction within Turkey’s military claims to have taken over control of the country in a coup after troops were deployed in Istanbul and Ankara.

A statement released by the Turkish armed forces says that it has “completely taken over the administration” of the country. The military has declared martial law.

Turkish President Recep Tayyip Erdogan appeared on television after the statement was released rejecting the coup attempt and called on his supporters to take to the streets. It is unclear where the president currently is.

Military jets could be seen flying over the capital Istanbul and gunfire was heard as military forces were deployed in the city. Military vehicles were blocking two major bridges in Istanbul.

Turkey’s NTV television reported that there had been an exchange of gunfire between police and military forces in Istanbul as well as near the presidential palace in Ankara. Turkish forces could also be seen taking police officers in custody.

Before the military released its statement, Turkish Prime Minister Binali Yildirim told NTV television: “It is correct that there was an attempt,” when asked whether there was a coup.

In its statement the Turkish Armed Forces said that it had taken over control “to reinstate constitutional order, human rights and freedoms, the rule of law and the general security that was damaged.”

Local media reports have also cited MIT, the national intelligence agency, as saying the coup had been defeated.

The MIT website was not immediately accessible from Turkey.

MIT spokesman Nuh Yilmaz said that Gen. Hulusi Akar, the military chief of staff, was back in control.

“Gen. Akar is back on top of his duties,” said Yilmaz. He added, “everything is returning to normal.”

Media reports said ambulances were seen in front of the Turkish military headquarters. NTV is reporting that helicopters are also flying over headquarters in Ankara.

The coup is seen as an uprising within the military against Erdogan who came to power in 2002 on a platform that promised to do away with the military’s involvement in Turkish politics. Over the past 14 years, Erdogan effectively diminished the power of the military by going after prominent generals as well as judges.

Critics say that Erdogan has also silenced dissenting media and voices critical to his rule. In an attempt to consolidate his power, he had called for a new constitution that would increase the powers of the president.

All Flights Cancelled in Istanbul

All flights at Ataturk airport in Istanbul have been suspended as a result of the coup.

The U.S. State Department is urging its citizens in Turkey to take shelter and not to go to the US embassy or consulates in Turkey.

Continue to shelter in place in #Turkey. Do not attempt to go to US Embassy or Consulates at this time. https://t.co/LCURQ9t6No

Turkish state media have disputed the idea that the coup was successful. Turkey’s Anadolu News Agency reported that the Minister of Justice has started a probe against the group that incited the uprising.

Appearing on the Anadolu News Agency channel, President Erdogan blamed U.S.-based cleric Fethullah Gulen for masterminding the coup. Gulen, who lives in exile in Pennsylvania, has frequently been accused by Erdogan of leading conspiracies against the government. In 2013, Gulen was accused of being behind the ‘Gezi Park’ movement that saw anti-government protests across the country.

Erdogan also appeared on CNN Turk through a ‘FaceTime’ live stream using an iPhone. An anchor could be seen holding the iPhone toward the camera.

He told the channel that he did not want to disclose where he currently was but that he planned to go to Ankara.

He blamed U.S.-based cleric Fethullah Gulen and his followers inside military and police department for masterminding the coup.

“This is a betrayal movement, a rebellion movement. And of course they will pay a very high price for betraying the country,” Erdogan said.

According to Erdogan, everything happens for a reason and he sees this event as a God’s blessing. He said this coup attempt, which happened ahead of the Supreme Military Council meeting in August, would be instrumental in cleaning up the Armed Forces further, meaning there will be more generals fired.

An eyewitness in the Mecidiyekoy neighborhood of Istanbul told Epoch Times that mosques are calling on people to take to the streets.

The witness also said that long lines could be seen at ATMs as citizens tried to withdraw cash — a desperate hedge against uncertainty.

Turkish state media have reported that colonel Muharrem Kose, who was fired in March, is behind the attempted coup.

The Anadolu News Agency channel also reported that an F-16 fighter jet has shot down one of the helicopters used by soldiers involved in the coup.

The White House released a statement saying that President Barack Obama and Secretary of State John Kerry believe that “all parties in Turkey should support the democratically-elected Government of Turkey.”

They also called for restraint and the avoidance of violence or bloodshed.

Tonight @POTUS spoke with Secretary of State @JohnKerry to discuss the events in #Turkey: https://t.co/2gWxxX8dJJ pic.twitter.com/gZ95QSJIF0

The Turkish Parliament was hit by an explosion amid the coup. A video shows the building hit by a large blast which was also confirmed by lawmakers inside.

While it is unclear who caused the explosion, Turkey’s Fox TV reported that it resulted from missiles fired by a military helicopter.

The media also reports that CNN Turk’s broadcast went off the air after soldiers entered their building. CNN Turk and Hürriyet Daily News are both owned by the Dogan Media Group.