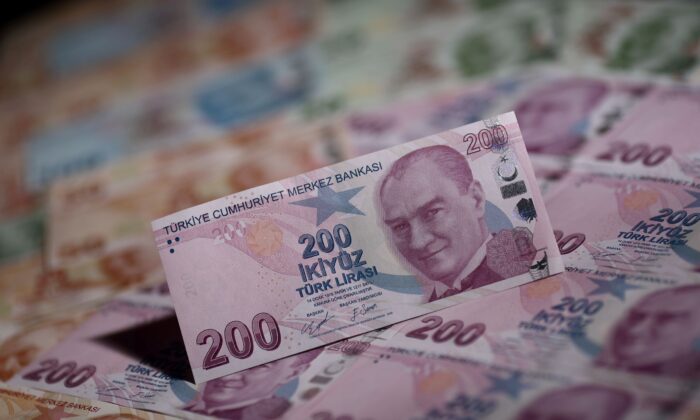 Turkish citizens are abandoning the country’s currency, the lira, in exchange for U.S. dollars amid an unstable economy that has seen inflation levels soar.

The lira crashed 15 percent against the dollar on Tuesday last week in its second-worst day ever after President Tayyip Erdogan, who has led the country since 2003, said that he would not be deterred by rising inflation and defended recent sharp rate cuts, declaring an “economic war of independence.”

Overall, the lira has fallen 45 percent this year, largely in response to a series of interest rates cuts by the central bank governor, Sahap Kavcioglu.

The currency crisis has seen Turks racing to exchange their lira for dollars, euros, and other more stable currencies.

Foreign currencies held by households in Turkish banks last week through Nov. 19 rose by nearly $1 billion, according to data released by the Turkish central bank on Thursday.

However, as of last week, individuals using international cards to make payments for certain goods in Turkey, including food and clothing, reported issues with their transactions as payment gateways and card processors struggled to keep up with the ever-changing currency exchange.

Erdogan has put pressure on the central bank to slash interest rates in a move he firmly believes will boost exports, investment, and jobs within the country. But critics fear this will further erode the lira, and trigger further inflation, which currently stands near 20 percent in the country.

Soaring inflation levels have already had drastic impacts on everything from the cost of basic goods to rental prices in Turkey, the latter of which have surged to new heights—with some regions seeing average prices shoot up 100 percent—and left hundreds struggling to afford rent.

Turkey’s population of roughly 85 million has also seen local currency salaries severely devalued and many are now left searching for second jobs to keep themselves and their families afloat.

Many economists have called the rate cuts reckless and urged the president to reverse course, while opposition politicians have appealed for early elections, which are set to take place in 2023.

Demonstrators were chanting slogans calling for Erdogan’s government to resign and held up signs reading “We can’t make ends meet,” along with others reflecting their economic plight.

A heavy police presence could be seen throughout the city before officers, clad in full riot gear, eventually intervened in the protests, detaining dozens of people. Officials arrested 55 people during the protests, according to local reports.

As of Monday morning, the lira was trading at roughly 12.78 to the U.S. dollar, a turnaround from last week’s lows but still showing signs of weakness.

Renowned economist Mohamed A. El-Erian said on Twitter, “Not much of a respite for the currency in Turkey this morning: Weakness prevails ahead of inflation data this week likely to show growing price pressures…though yet to capture the full impact of the price-pass through from the recent sharp depreciation of the Lira.”

On Monday, Erdogan doubled down on his support for his government’s economic policies despite backlash from citizens and economists.

“Tayyip Erdogan has talked from the beginning about low interest rates and says ‘this interest rate will come down,'” the president was quoted as telling reporters on his flight back from a visit to Turkmenistan.

“I have never defended raising interest rates, I don’t now and will not defend it,” he said. “I will never compromise on this issue … You will see, God willing, how far inflation falls before the election,” he added. “The interest rate lobbies are seething.”