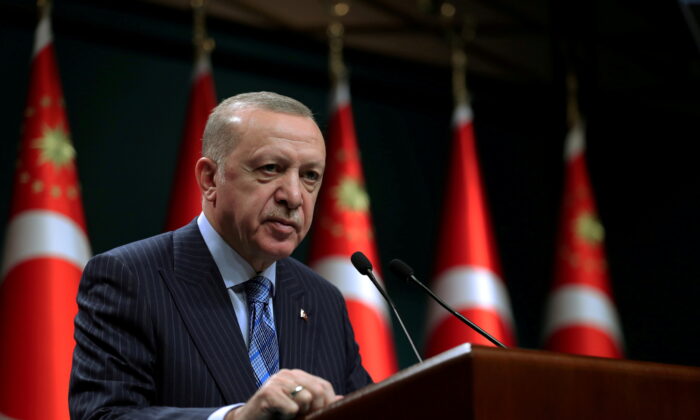 Turkish President Tayyip Erdogan gives a statement after a cabinet meeting in Ankara, Turkey, on May 17, 2021. (Murat Cetinmuhurdar/PPO/Handout via Reuters)
Europe

Turkey’s annual inflation soared to a 20-year high of 48.69 percent in January, according to data from the Turkish Statistical Institute (TUIK), as President Tayyip Erdogan continues with his unorthodox approach of lowering interest rates in the face of rising inflation.

The lowest annual increases were seen in communication, education, clothing and footwear, and health, TUIK said, although multiple clothing and footwear stores across Istanbul have seen prices increased by thousands of liras in recent months, despite offering customers a so-called “indirim” or sales.

The group said that the rate of inflation increased by 114.87 percent in the last 12 months.

Turkey’s lira shed nearly half of its value last year, largely in response to a series of interest rate cuts by the central bank governor, Sahap Kavcioglu, as Erdogan pushes to prioritize credit and exports.

Erdogan’s moves come despite soaring prices across the country and the fact that Turkey relies heavily on imports for things like energy and many consumer goods.

In response to the weakening lira, many Turks opted to stock up on gold and store their money in safer foreign currencies such as the euro and U.S. dollar.

Turkey’s population of roughly 85 million has also seen local currency salaries severely devalued and many are now left searching for second jobs to keep themselves and their families afloat.

Since September, the central bank has slashed interest rates by 500 basis points to 14 percent although the government has raised the minimum wage by 50 percent.

But given the soaring costs of everything from food to household goods, it’s unclear exactly what effect the salary increase will have on Turks who have been left crippled by the struggling economy.

The latest data comes just days after Erdogan replaced the head of TUIK for the fourth time since 2019, appointing Erhan Çetinkaya who served as vice president of Turkey’s banking regulation agency, in place of Sait Erdal Dinçer, less than a year after his appointment.

The reason for the move was unclear although Turkish media reports that Erdogan was unhappy with agency data showing inflation reaching the highest level since his AK Party first took office, which could see his support dwindling further ahead of the 2023 elections.

Opposition parties and some economists have accused TUIK of distorting official data for political reasons. Those claims have been dismissed by the agency.

On Saturday, Erdogan said interest rates would be lowered yet again while maintaining that inflation would also decline.

“We will lower interest rates as we have done already,” Erdogan told an audience in the northern province of Giresun.

“The exchange rate will stabilize, and inflation will fall, prices will fall too, all of these are temporary,” he added.