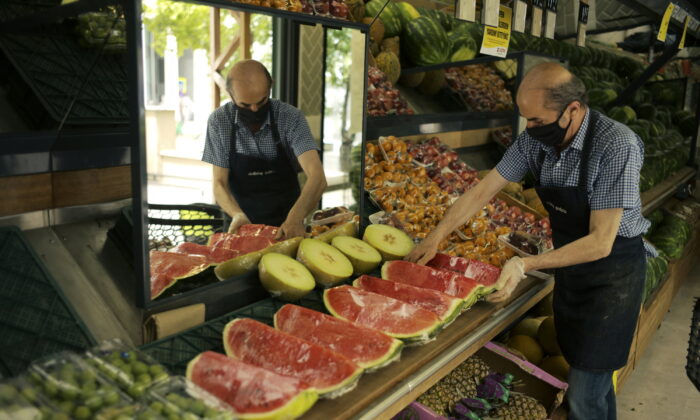 A worker arranges fruit for sale a food market in Ankara, Turkey on June 3, 2022. Annual inflation in Turkey hit 73.5 percent in May, according to official data released by the Turkish Statistical Institute, as a cost-of-living crisis in the country deepens. (AP Photo/Burhan Ozbilici)
World

Turkey’s Inflation Surges Nearly 80 Percent in July, Experts Warn It May Not yet Have Peaked

Annual inflation in Turkey rose to a fresh 24-year high in July, as the country’s currency, the lira, continues to weaken and the cost of living surges across the nation, official data revealed on Aug. 3.

The Turkish Statistical Institute stated that consumer prices rose by 79.6 percent from a year earlier, and were up by 2.37 percent month-over-month.

A Reuters poll had forecast a rise of 2.9 percent month-over-month, while annual consumer price inflation was forecast to be 80.5 percent.

According to unofficial data from the independent inflation research group ENAG, Turkey’s monthly consumer price inflation rate increased by 5.03 percent in July, nearly double that of government figures, while annual inflation has increased by 176.04 percent.

Government data show that the largest annual rise in consumer prices was in the transportation sector, which was up by 119.11 percent, while food and nonalcoholic drinks prices jumped by 94.65 percent.

Communication was the main group that indicated the lowest annual increase at 25.79 percent, the data show.

Inflation began to surge in Turkey in about autumn 2021, when the Turkish lira declined following the central bank’s decision to impose a 500 basis-point easing cycle as part of what many have called Erdogan’s “unorthodox” approach to monetary policy.

Opponents argue that lowering interest rates will only lead to higher inflation, but the president hasn’t backed down.

Prices Constantly on the Upswing

The cost of living has steadily risen since the lira’s decline, leaving households forking out substantially more for everyday staple items, the prices of which can often change on a daily or weekly basis in supermarkets.

Many families in Turkey’s largest city of Istanbul have had to turn to Istanbul Halk Ekmek, or “public bread” kiosks, to get their hands on discounted bread products that are cheaper than at bakeries across the city.

That’s despite the government announcing a significant reduction in taxes on basic food supplies in February in an effort to fend off inflation.

Inflation has been further fueled by the economic impact of Russia’s invasion of Ukraine, which has hit Turkey hard, as it relies heavily on imports for things such as energy, the costs of which have soared since February.

Critics of Erdogan say that his monetary policy is to blame for the current economic crisis in Turkey.

“If this monetary policy continues, it will be impossible to get ahead of inflation,” Ogeday Topcular, a money manager at RAM Capital SA in Geneva, told Bloomberg on Aug. 3. “Turkey’s monetary policy is unsustainable.”

Turkish economist Selva Bahar Baziki said this week that “unanchored expectations and a weakening lira are feeding further into prices.”

“We don’t expect the central bank to tighten interest rates in response to ever-rising inflation—instead, the political leadership is calling for even lower rates,” Baziki said.

Jason Tuvey, senior emerging markets economist at Capital Economics, told Reuters on Aug. 3 that annual inflation may be reaching its peak, but that it will likely “remain close to its current very high rates for several more months.”

However, a forecast range chart accompanying the government’s latest inflation report shows that price growth is set to peak closer to 90 percent during the September to October period.

The latest data come as Erdogan and his Justice and Development Party are facing falling popularity ratings ahead of the general election scheduled for June 2023.