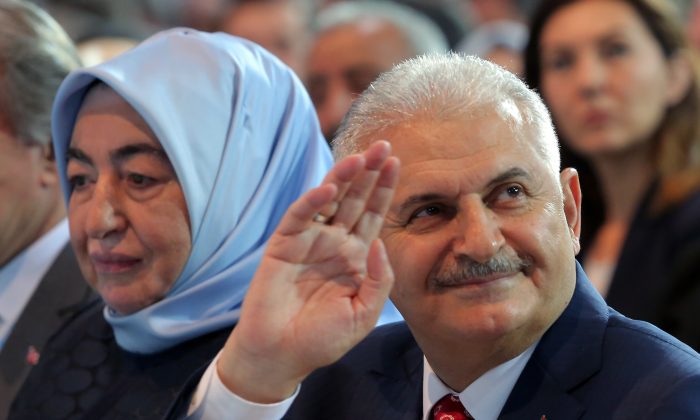 Binali Yildirim, Turkey's current Transportation Minister and founding member of the AKP, Turkey’s governing party, and his wife Semiha Yildirim salute supporters during party congress in Ankara, Turkey, on May 22, 2016. Turkey's ruling party held a special convention on Sunday to confirm Binali Yildirim, a longtime ally of President Recep Tayyip Erdogan as its new chairman and next prime minister, a move that is likely to consolidate the Turkish leader's hold on power. (AP Photo/Riza Ozel)
Middle East

ANKARA, Turkey—Turkey’s ruling party held a special convention on Sunday to confirm a longtime ally of President Recep Tayyip Erdogan as its new chairman and next prime minister, a move that is likely to consolidate the Turkish leader’s hold on power.

Binali Yildirim, the transport and communications minister and a founding member of the governing Justice and Development Party, or AKP, is set to replace Prime Minister Ahmet Davutoglu who announced earlier this month that he is stepping down amid differences with Erdogan.

Yildirim, 60, who is running unopposed for the party’s leadership, is widely expected to be more in tune with Erdogan, who is pushing for an overhaul of the constitution that would give the largely ceremonial presidency executive powers.

Traditionally, the post of premier in Turkey goes to the leader of the largest party in parliament and Erdogan is expected to formally ask Yildirim to form a new government after the convention.

In his speech, Yildirim paid homage to Erdogan and expressed his devotion to him.

“We have always proudly said that we are Recep Tayyip Erdogan’s companion, that we share a common fate and a common passion,” Yildirim said. “Mr. President, we promise you that your passion will be our passion, your cause will be our cause, your path will be our path.”

He also vowed to work to introduce a new constitution changing Turkey’s political system into a presidential system, to make the current “de facto situation” a “legal” one.

Earlier, in a message read at the opening of the convention, Erdogan again stressed the need for a new constitution and a new system of government and said he hoped the term ahead would help correct the current “skewed” system of administration. Delegates and party officials stood up as his message was read.

“My legal bond with the AKP may have ended the day I took the (presidential) oath of office, but my bonds of love have never ended and never will,” Erdogan said.

Supporters credit Yildirim for his role in developing major infrastructure projects which have helped buoy Turkey’s economy and boost the party’s popularity. But critics, including the leader of the main opposition party, have accused him of corruption. Yildirim has rejected the accusation.

The change in party leadership comes at a time when NATO member Turkey is facing an array of security threats including renewed conflict with Kurdish rebels in the southeast, a wave of suicide bombings linked to Kurdish and Islamic State militants, as well as growing blowback from the war in neighboring Syria.

The transition also coincides with growing tensions with the European Union over a controversial deal to reduce the flow of illegal migrants from Turkey to Greece, which Davutoglu helped broker.

Davutoglu, a one-time adviser to Erdogan and a former foreign minister, fell out with the president over an array of issues including the possibility of peace talks with Kurdish rebels, the pre-trial detention of journalists accused of spying and academics accused of supporting terrorism.

Turkey’s president is pushing for a broader definition of terrorism, alarming rights groups who say existing laws are already too widely interpreted to crush dissent. His stance is also at odds with EU conditions for Turkish citizens to benefit from visa-free travel.

Crucially, Erdogan wants to turn the figurehead presidency into an all-powerful position while the independent-minded Davutoglu was believed to be less-than-enthusiastic toward that project. Many believe Yildirim will work to push Erdogan’s agenda through.

In his farewell speech, Davutoglu said the extraordinary convention to endorse a new leader was not his wish but that he agreed to it to preserve the unity of the party.

“Our issue, our cause, come above all personal concerns,” Davutoglu said. “The sole reason behind my decision to hand over the position is the value I place on the unity of our party and my concern that the AKP movement does not come to any harm.”