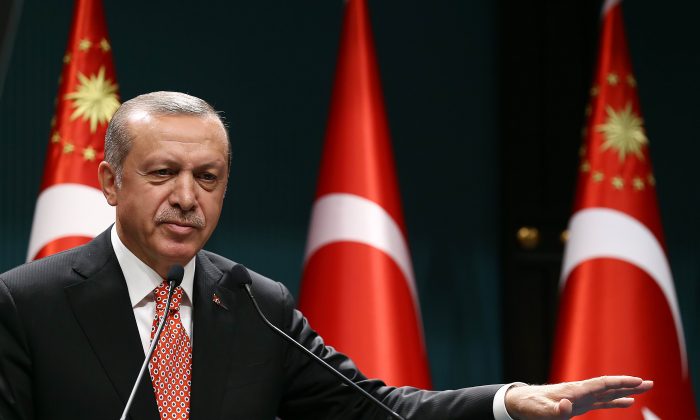 Even before the failed military coup, Turkey’s President Erdogan governed like a dictator who had the last word on all state matters. The botched coup was nothing but, as he put it, “a gift from God” to purge what is left of Turkey’s democracy and cleanse the army and judiciary in order to ensure the total subordination of all institutions to his whims.

For Erdogan, being elected was akin to being granted a license to trample and dismantle all democratic tenets to consolidate his powers and promote his Islamic agenda.

As a shrewd and highly skilled politician, Erdogan painted the coup as an assault on democracy, which was supported by a chorus of Western powers, knowing full well that Turkey under Erdogan is anything but a democracy.

As a shrewd and highly skilled politician, Erdogan painted the coup as an assault on democracy, which was supported by a chorus of Western powers, knowing full well that Turkey under Erdogan is anything but a democracy.

His staying power, however, is attributed to his uncanny ability to appeal to the underclass and his success in delivering the “goods” that nearly half of the population was in dire need of, including access to health care, improved infrastructure, job opportunities, and the promotion of Islamic values (in a manner that was unacceptable in the past) with which ordinary Turks could identify.

The nearly 50 percent of the population who benefited directly from these reforms and became ardent supporters of Erdogan were not concerned about the trampling of democratic rule, even though he has systematically robbed them of any rights that a democracy provides. Nevertheless, tens of thousands heeded his call to go out to the streets to confront the military, and did so at grave risk to their lives.

In fact, one of the main reasons behind the coup was to stop Erdogan from completely destroying Turkey’s remaining secular and democratic pillars, which were established by Turkey’s founder Mustafa Kemal Ataturk in 1923.

Ataturk sought to establish a Western-style secular democracy and made the military the custodian of Turkey’s constitution. The armed forces exercised that prerogative four times before to prevent the country from sliding into disorder.

The first coup, in 1960, led to the overthrow and execution of Prime Minister Adnan Menderes due to his increasing Islamization of the country; the fourth coup in 1997 ended with the forced resignation and banishment from politics of Prime Minister Necmettin Erbakan, also because of his degradation of secular principles of the country.

While effecting regime change through a military coup is certainly not the preferred method, given how Erdogan gradually and successfully pillaged the country of all its democratic substance, a segment of the military felt it had little choice but to stage a coup to change the perilous path that Erdogan is pursuing.

This entire tragic episode could have been prevented had Western powers, led by the United States, been more vociferous in condemning the unruly way in which Erdogan exercised his power, especially in the past several years; instead, they kept emphasizing Turkey’s strategic importance, which Erdogan fully exploited to his advantage.

Turkey’s role in hosting nearly 2.5 million Syrian refugees and its ability to either stem the flow or open up the gates to allow refugees to flood European cities further strengthened Erdogan’s hand.

He successfully exploited the EU’s deep concerns over the refugee crisis by making a deal that provides Turkey several major benefits that outweighed its obligations. The keystone of the deal is that migrants crossing from Turkey into Greece will be sent back, and for each Syrian returned to Turkey, a Syrian refugee will be resettled in the EU.

In return, Turkish nationals would have access to the Schengen passport-free zone while the EU fast-tracked the allocation of 6 billion euros ($6.6 billion) in aid to Turkey to help migrants, and to “energize” Ankara’s bid to join the EU.

Although thus far the EU resisted Erdogan’s threat to cancel the deal if it were to renege on its agreement on visa-free entry due to his post-coup threat to restore the death penalty, Erdogan remained defiant, believing that he can bully the West with impunity.

Moreover, Erdogan presumed Turkey’s significant role in fighting the Islamic State (ISIS) and his consent to allow the U.S. Air Force to use Turkey’s Incirlik Air Base to strike ISIS targets gave him increased leverage against the United States, which further muted any criticism for his continuing gross violation of human rights.

Those who had hopes that Erdogan might just take heed of the coup and show some restraint in dealing with those suspected of being involved in it had those hopes quickly dashed.

He wasted no time in initiating a massive witch hunt—nearly 9,500 are currently facing legal proceedings, and around 50,000 soldiers, judges, civil servants, and teachers have been suspended or detained. Hundreds if not thousands will languish in jail under emergency laws that permit indefinite administrative detention without formal charges.

More ominously, Erdogan “raided” higher learning institutions by barring all academics from any foreign travel even for scholarly purposes, while the state education council demanded the resignation of over 1,500 university deans.

The vast number of people rounded up so quickly raises suspicions that these individuals had already been blacklisted; Erdogan was able to do so with a nearly 200,000-strong internal police force and intelligence units, who are extremely loyal to him.

Leave it now to Erdogan, who has emerged stronger than before the coup, to further intensify his brutal war against the Kurdistan Workers’ Party (PKK) and the Syrian Kurds, who are the U.S.’s allies no less, and continue to refuse to resume negotiations with Turkey’s significant Kurdish community.

Perhaps the time has come for the EU and the United States to reassess their relations with Turkey and stop enabling Erdogan to exercise free reign, when in fact his behavior has a direct and indirect impact on Western interests, both domestically and in the Middle East.

The United States cannot afford any member of NATO to squash all democratic rules with no consequences. Moreover, Erdogan has demonstrated time and again a lack of loyalty and commitment as a NATO member.

Turkey should be put on notice, as Secretary of State John Kerry recently stated that NATO has a “requirement with respect to democracy … Obviously, a lot of people have been arrested very quickly.” He grimly added, “Hopefully we can work in a constructive way to prevent backsliding.”

Moreover, Erdogan should be warned that Turkey’s prospect of becoming an EU member will be a thing of the past if he continues to grossly undermine the principles of democratic governance, including the complete subordination of the judiciary to his political agenda.

Though the United States and the EU need Turkey in the fight against ISIS, Erdogan should be reminded that ISIS constitutes an even greater threat to Turkey than to Western interests.

Finally, Turkey should be pressured to resume negotiations with its Kurdish minority and bring an end to the war against the PKK, which is further destabilizing the region at a time when the focus must be on defeating ISIS.

In that regard, Erdogan must understand that there will be serious consequences if he does not end his assault against the Syrian Kurds under the pretext of fighting terrorism. (He conveniently accuses their military wing, the PYD, of working in conjunction with the PKK.)

Whereas Erdogan viewed the failed coup as a God-sent opportunity to wipe out whoever is perceived to be his enemy, the United States and the EU must use this occasion to put Erdogan on notice that history has shown time and again that totalitarian regimes come to a bitter end, and that he too will not be spared his day in court.