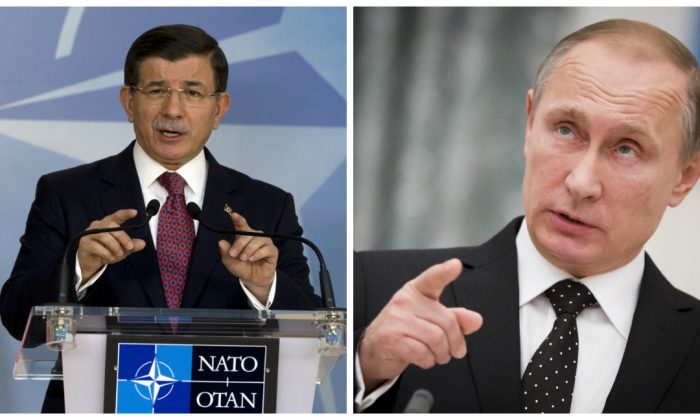 Supported by NATO, Turkey is refusing to apologize for shooting down a Russian fighter jet that it says violated its airspace near the Syrian-Turkey border.

“No country should ask us to apologize,” Prime Minister Ahmet Davutoglu told reporters following a meeting with NATO’s secretary general at the alliance headquarters in Brussels, according to Reuters.

“The protection of our land borders, our airspace, is not only a right, it is a duty.”

Russian President Vladimir Putin said on Nov. 26 that he’s waiting for an apology. Turkey’s president tried to meet with Putin, but his Russian counterpart refused.

Davutoglu added that he’s ready to provide any information that Russia seeks on the situation.

He also said that Turkish officials “hope Russia will reconsider these measures in both our interests.”

Russia over the past few days has announced a series of measures against Turkey, including restrictions on migrant workers from there in Russia, and cancellations of charter flights and tour packages that include Turkey.

Included in the measures is a food ban.

Ben Aris, editor-in-chief of the Business New Europe magazine, told state-affiliated Sputnik News that the ban will hurt Turkey, noting that Russian tourists bring about $6.5 billion a year to Turkey’s economy while Turkish companies often do business in Russia.

Meanwhile, NATO chief Jens Stoltenberg said that Moscow should agree to new emergency procedures that are expected to be discussed this week by NATO foreign ministers, including revamping the Vienna document, which includes military communication protocols.

“It has to be modernized because there are several loopholes,” Stoltenberg said.

He also said Russia should coordinate with the U.S.-led bombing efforts against the Islamic State as most of the Russian bombs have targeted other, more moderate groups.

“Their bombing is taking place in areas where ISIL is not present at all,” Stoltenberg said.