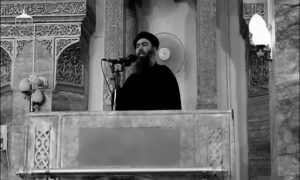 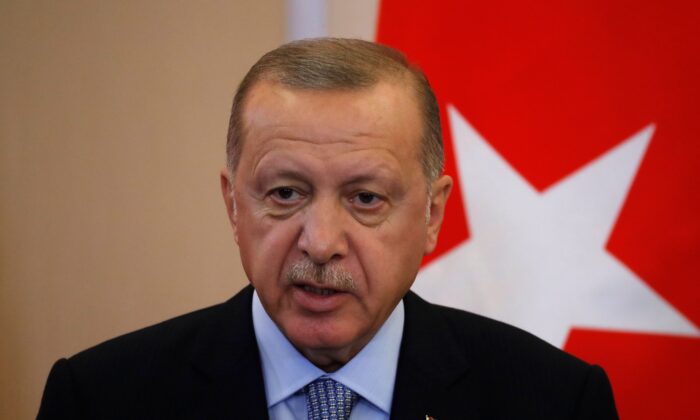 Turkish President Recep Tayyip Erdogan speaks during a joint press conference with his Russian counterpart following their talks in the Black sea resort of Sochi on Oct. 22, 2019. (SERGEI CHIRIKOV/POOL/AFP via Getty Images)
World

Turkey has welcomed the death of ISIS leader Abu Bakr al-Baghdadi who killed himself when cornered by U.S. Special Operations forces in Northern Syria on Oct. 26.

The spokesperson of Turkey’s Ministry of Foreign Affairs, Hami Aksoy, said in a statement on Oct. 27 that the dead ringleader of ISIS, also known as DAESH, was an enemy of Turkey.

It read: “Abu Bakr Al-Baghdadi is one of the biggest enemies of humanity, Islam, and Turkey.

“Turkey, being one of the most active members of the The Global Coalition Against DAESH, has engaged in hand to hand combat in the forefront of the fight against the terrorist organization founded by this terrorist and the wicked ideology that it represents.

ISIS’s religious-political ideology stems from Salafi jihadism, which according to the Harvard Divinity School opposes the influence of Western colonial powers for interfering with the correct practise of Islam. Their interpretation of Islam espouses for a return to the ways of the era of the first Muslim community, and taking the Quran and Sunnah as “the only authoritative sources for Islamic law.”

“Our struggle against terrorist organizations such as DAESH and PKK/PYD will continue uninterrupted also in the future,” Aksoy said.

Meanwhile, Turkish President Recep Tayyip Erdogan said that the death of Bakr Al-Baghdadi marked a turning point in the joint fight against terrorism.

In a series of tweets, the president said: “Turkey will continue to support anti-terror efforts—as it has done in the past.

“Having paid the dearest price in the fight against Daesh, PKK/YPG, and other terrorist organizations, Turkey welcomes this development.”

Erdogan concluded: “I am confident that a decisive struggle against terrorism, in line with the spirit of alliance, will bring peace to all of humanity.”

On Oct. 27, U.S. President Donald Trump revealed the details of the successful raid against al-Baghdadi during a press conference at the White House.

The president said that capturing or killing al-Baghdadi had been a top national security priority under his administration and added that the former leader had died “like a coward.”

According to Trump, al-Baghdadi had fled the raid on Saturday but found himself in a closed-ended tunnel where he detonated an explosive vest he was wearing.

The terror group leader had taken three children with him who he killed by detonating his vest. The U.S. military’s canine, who was pursuing al-Baghdadi, was injured by the blast.

Trump noted that no U.S. personnel died during the successful raid but a large number of al-Baghdadi’s fighters were killed along with him.

He also thanked Turkey, along with Russia, Syria and Iraq for their cooperation in the dangerous mission, noting that U.S. forces had to fly over their territory during the mission.

He said: “Turkey … they knew we were going in. We flew over some territory. They were terrific.”

The president later spoke of the great losses Turkish forces had taken in its fight against ISIS.

He said: “Turkey has taken tremendous deaths from that part of the world. You know, we call it a ‘safe zone.’ But it was anything but a safe zone.

“Turkey has lost thousands and thousands of people from that safe zone. So they’ve always wanted that safe zone, for many years. I’m glad I was able to help them get it.”

Israeli Prime Minister Benjamin Netanyahu congratulated Trump on his “impressive achievement,” which he said was an “important milestone.”

In a statement, Netanyahu said: “I want to congratulate President Trump on the impressive achievement, an operation that led to the death of the Daash leader Al Baghdadi. This reflects the united resolve of the free countries led by the United States to fight the forces of terror, the terror organizations, and the terrorist states. This is an important milestone, but it’s part of a longer battle which me must win.”

On Twitter, the commander of the Kurdish-led Syrian Democratic Forces (SDF) Mazloum Abdi said the achievement was a result of “joint intel cooperation.”

He wrote: “For five months there has been joint intel cooperation on the ground and accurate monitoring, until we achieved a joint operation to kill Abu Bakir al-Bagdadi.

“Thanks to everybody who participated in this great mission.”

UK Prime minister Boris Johnson also tweeted: “The death of Baghdadi is an important moment in our fight against terror but the battle against the evil of Daesh is not yet over.

“We will work with our coalition partners to bring an end to the murderous, barbaric activities of Daesh once and for all.”

He did not elaborate further on the comments.

According to analysts, this anti-imperialist tone can be traced back to the 1979 revolution when Khomeini brought reform to the country, fusing Shi’a Islamic theology with Marxist ideology of the populist Islamic left that was prevalent among his loyalists at the time.

“Khomeini’s division of the world into the oppressed and the oppressors arguably owed as much to Marx as to Islam,” write Professor Ali Ansari and Kasra Aarabi from the Tony Blair Institute for Global Change.