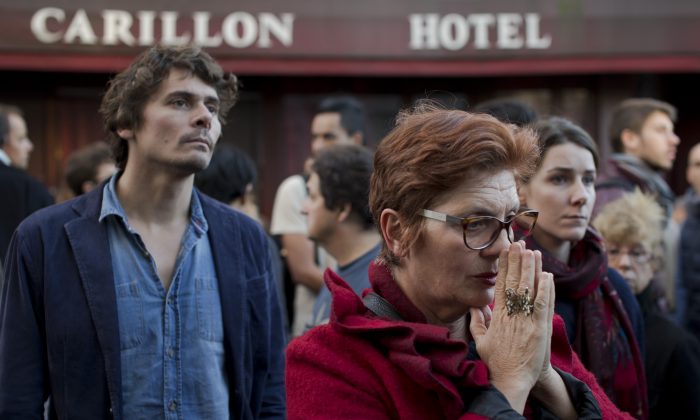 People pay their respect to the victims of the the attacks on restaurant Le Petit Cambodge (Little Cambodia) and the Carillon Hotel, rear, on the first of three days of national mourning in Paris, Sunday, Nov. 15, 2015. (AP Photo/Peter Dejong)
Europe

Mostefai has been identified by French authorities as one of the suicide bombers in the attacks across the capital that left over 100 dead and hundreds of others wounded.

A Turkish official told the Guardian that Turkey tried twice to warn France about Mostefai.

“We have, however, not heard back from France on the matter,” the official said. “It was only after the Paris attacks that the Turkish authorities received an information request about Omar Ismail Mostefai from France.”

Mostefai entered Turkey in 2013 but there is no record of him leaving. In October 2014, Turkey received an information request regarding four terror suspects from French officials but Mostefai was not one of them. It’s believed Mostefai entered Syria sometime that year.

Turkish officials told France about Mostefai in December 2014 and June 2015.

Mostefai was the first terrorist identified after his severed finger was found at Bataclan Theatre.

Mostefai lived in Chartres, about 50 miles outside Paris, with a wife and young daughter for several years until 2012.

“His wife didn’t work and they had a very young daughter, nothing stood out,” said a neighbor to Guardian. “He was 25 at the time. He always wore trainers and a cap, he was tall, he had long hair and a short beard and didn’t dress in a religious way. He didn’t work regularly, he had temporary jobs. There didn’t seem to be anything odd. He didn’t have visits.”

The BBC noted that Mostefai regularly attended mosque while living in Chartres.

He was born in France and grew up on an estate in Courcouronnes in Essonne, just outside Paris. His father was of Algerian descent.

Mostefai was convicted of eight petty crimes between 2004 and 2010. Francois Molins, the lead French prosecutor in the investigation, says officials knew Mostefai was a possible threat. They had an “S” file on him, which means investigators believe he had been “radicalized” in some way, though it was not clear whether he would act on his radicalization.

Mayor Jean-Pierre Gorges says that Mostefai was “radicalized” at a mosque in Chartres, but officials at the mosque claim that Mostefai didn’t go there. “We expel people who do not respect our rules or behave strangely, and we report them to the authorities,” the president of the mosque told AFP.

But Gorges said he was told Mostefai had become more extreme, mostly due to a “visiting imam.”

“In greater Chartres — there’s a number of places of worship,” the mayor told CNN. “And there are some which are run correctly. But there are others where there are Imams who try to convert people — which leads to radicalization.”

Meanwhile, Mostefai’s family claims they had no idea what he was up to.

“It’s a crazy thing, it’s madness,” his 34-year-old brother told AFP, adding that he had not spoken to his brother recently and he had last heard Mostefai had gone to Algeria.

“It’s been a time since I have had any news. I called my mother, she didn’t seem to know anything.”