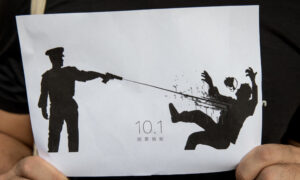 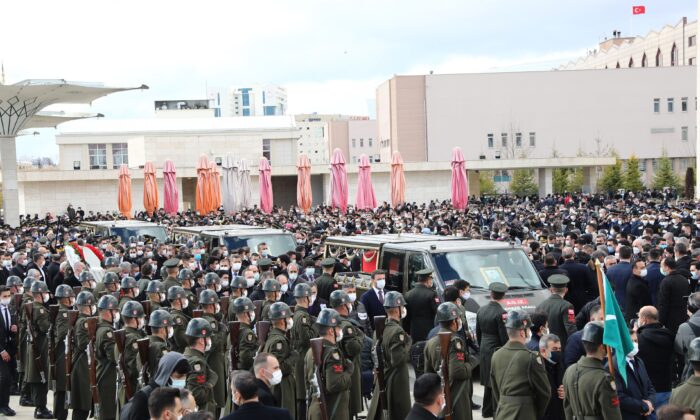 The coffins of three Turkish military personnel killed in action arrive in military vehicles at the Ahmet Hamdi Akseki Mosque during their funeral in Ankara on Feb. 12, 2021. (Adem Altan/AFP via Getty Images)
Middle East

ISTANBUL—Terrorists from the outlawed Kurdistan Workers Party (PKK) have executed 13 kidnapped Turks, including military and police personnel, in a cave in northern Iraq, Turkish officials said on Sunday, amid a military operation against the group.

Forty eight PKK terrorists were killed during the military operation, while three Turkish soldiers were killed and three wounded, Defence Minister Hulusi Akar said in a statement. Twelve of the kidnapped Turks had been shot in the head and one in the shoulder, he said.

Turkey launched the military operation against the PKK in northern Iraq’s Gara region, some 35 km (22 miles) south of the Turkish border, on Feb. 10 to secure its frontier and find citizens who had been kidnapped previously, he said.

The governor of Malatya province in southeast Turkey named six soldiers and two police officers, kidnapped in separate incidents in 2015 and 2016, as being among those killed in the cave. Three of the dead have yet to be identified in autopsies being carried out in Malatya.

One senior security source told Reuters that Turkish intelligence personnel were among the dead.

“According to initial information given by two terrorists captured alive, our citizens were martyred at the start of the operation by the terrorist responsible for the cave,” Akar said at the operation’s control centre near the Iraq border.

A statement on a PKK website said some prisoners it was holding, including Turkish intelligence, police and military personnel, had died during clashes in the area. The group denied it had ever hurt prisoners.

The PKK, designated a terrorist group by Turkey, the United States and European Union, launched its armed insurgency in mainly Kurdish southeast Turkey in 1984 and more than 40,000 people have been killed in the conflict.

In the last two years Turkey’s fight against the PKK has increasingly focused on northern Iraq, where the group has its stronghold in the Qandil mountains on the Iranian border.

The presidency’s communications director Fahrettin Altun said on Twitter that as Turkey mourns it dead it also reiterates its commitment to “chase down every last terrorist hiding in their caves and safe houses”.

“Our revenge will be painful. Our justice will be swift,” he said, slamming the West’s “deafening silence” in the face of PKK attacks and pledging “steps against individuals and groups glorifying and encouraging terrorism at home and abroad.”

In 2017, Turkey’s foreign minister said Ankara was working to bring back citizens he said had been kidnapped by the PKK, after Turkish media reported two Turkish intelligence officers had been captured by the PKK in Iraq.