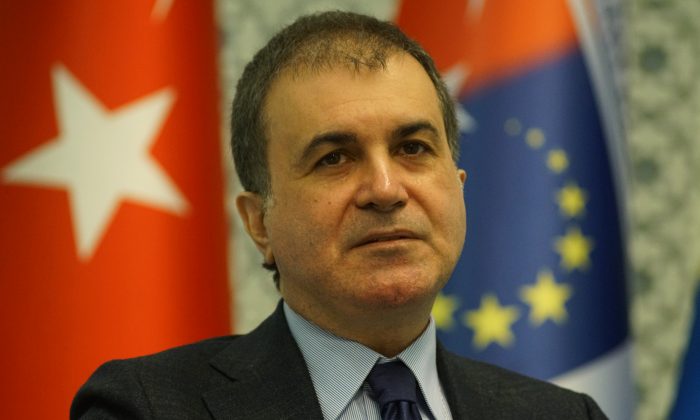 ANKARA—Dutch investment in Turkey is not threatened by the diplomatic row between the two countries, as Ankara’s ire is focused on the Dutch government, not its people or businesses, Turkey’s minister for EU affairs told Reuters.

In an interview late on Tuesday, Omer Celik also said he believed the time had come for Turkey to reassess its migration agreement with the European Union, since it has become clear the EU was not following through on its promise to grant Turks visa-free travel.

Turkey suspended high-level diplomatic relations with the Netherlands on Monday, banning the Dutch ambassador from the country and preventing diplomatic flights from landing, after the Dutch barred Turkish ministers from speaking to rallies of overseas Turks.

Despite the furor, Celik said Ankara was telling businesses worldwide that Turkey was safe for investment.

“Dutch businessmen who invest, have businesses and create employment in Turkey are included in this. They are definitely not part of the crisis,” he said.

“The private sector, business world, tourists and the people of the Netherlands are not a part of the crisis.”

His comments could reassure investors, after Turkish Deputy Prime Minister Numan Kurtulmus said on Tuesday economic sanctions against the Netherlands might be in the works.

Dutch direct investment in Turkey amounts to $22 billion, making the Netherlands the biggest source of foreign investment with a share of 16 percent. Turkish exports to the Netherlands totaled $3.6 billion in 2016, making it the Turkey’s 10th largest market, according to official data.

The row exploded after Turkish President Tayyip Erdogan branded the Netherlands “Nazi remnants” at the weekend for barring Turkish ministers from speaking in Rotterdam.

Some analysts have said they don’t expect the affair to have immediate economic consequences. However, foreign investor sentiment towards Turkey has been badly bruised by widening security concerns and fears of growing authoritarianism.

Erdogan is drumming up support before an April 16 referendum on expanding his powers, and he has been looking to the large number of Turks living in Europe to help secure victory. But Turkish campaigning abroad has raised tensions with several European countries, including Germany.

The row has called into question a landmark agreement last year in which Turkey promised to stop migrants and refugees using the country as a route to the European Union, in return for EU aid and the promise of visa-free travel to the bloc.

“It has emerged that the EU has not kept its word. I am saying this personally: Turkey does not have any obligation to the other side concerning the implementation of this deal. Hence it can reassess it when it wants and in the way it wants. I think the time has come to review it,” he said.

Progress on the issue has been held up by legal wrangling. Brussels says Ankara needs to narrow its anti-terror laws to meet EU standards; Turkey says it needs the laws in their current form to combat multiple security threats.

“Their request for us to relax our terror legislation when they are broadening theirs has nothing to do with objectivity and justice,” he said.

“Under these condition we cannot relax our terror legislation.”